The last day South African schools will be open is Wednesday, March 18; they will be closed thereafter

A notice widely shared on WhatsApp claims that all schools in South Africa would close on Monday, March 16, 2020. This is false: The last day of school will be Wednesday, March 18, and schools will be closed thereafter, as announced by South Africa’s Department of Basic Education.

The notice circulating on Whatsapp, which uses the logo of the Department of Basic Education, reads in part: "Department of health has confirmed that the circulation of this virus will increase by 45% in South Africa, therefor people are advised to stay in their homes and avoid overcrowded places including shopping malls, churches and schools etc. All public schools will be closed as from Monday the 16th of March 2020." 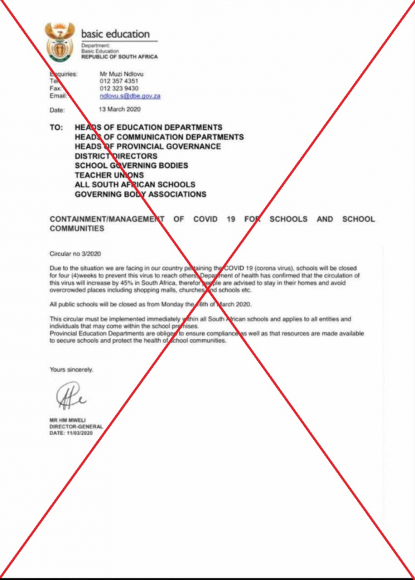 An image of the misleading statement shared on March 15, 2020

The DBE, on its verified Twitter account, warned social media users to not “fall victim to fake news”.

“Don't fall victim to fake news. We distance ourselves from this fake circular doing the rounds,” the tweet read.

At the time this misleading notice started circulating on WhatsApp, the department had not yet announced any school closures, as its spokesman explained on Twitter.

The DBE also stated that the signature used in the misleading document was lifted from guidelines sent out to schools earlier in the week.

South Africa’s President Cyril Ramaphosa also announced to the nation that schools would close from March 18.

“Schools would be closed from Wednesday, 18 March, and will remain closed until after the Easter Weekend,” he said.

“In accordance with the pronouncement by the President on 15 March 2020, schools will be closed from 18 March 2020. As a sector we have determined that schools should resume on 14 April 2020,” said Motshekga.

[READ] #DBENews Schools to close on Wednesday, 18 March 2020! Read the statement delivered by the Minister of Basic Education, Mrs Angie Motshekga at the inter-ministerial media briefing on the #COVID19: https://t.co/7d2ce3qmVu @ElijahMhlanga pic.twitter.com/sOZhu58MFM

Wednesday is the last school day of Term 1, schools will reopen on Tuesday, 14 April 2020. https://t.co/pgJqKdXDGj

Another statement from the DBE states the decision is “informed by the warnings provided by the National Institution of Communicable Diseases and the World Health Organisation who have highlighted the alarming increase of infections within the country over a three day period.”

“Schools have thus been identified as high risk areas that could spread the infections easily,” adds the statement.

[READ] Circular to schools on the containment/management of #COVID19 for schools and school communities @ElijahMhlanga pic.twitter.com/rfpgx8c5nl

The confirmed COVID-19 cases in South Africa numbered 62 as of March 16, according to the National Institution of Communicable Diseases.

@nicd_sa , @nhls_sa and private laboratories have conducted a total of 2 405 tests to date. As of 16 March 2020, we confirm an additional 11 new #COVID19 positive cases. This brings the country to a total of 62 confirmed COVID-19 cases. https://t.co/hqhT3w7Nok pic.twitter.com/EDmfMCjkYB