Dogs rescued from a South Korean-run online dog fighting racket are chained to steel barrels used as their temporary shelters as they wait to be handled by volunteers from the Philippine Animal Welfare Society (PAWS) in San Pablo City, Laguna province, south of Manila on April 3, 2012 (AFP / Ted Aljibe)

The largest dog fighting farm bust in US history took place ten years ago, not in June 2019

An article shared more than 136,000 times claims that 400 pitbulls were recently freed following a dog fighting farm bust in the United States. While a similar event did occur, it was in 2009, and the photo used to illustrate the article on Facebook shows pit bulls rescued in the Philippines in 2012.

An article published on June 3, 2019 by the website News360 claims: “Over 400 pitbulls saved in largest dog fighting farm bust.”

According to the article, “animal welfare officers in Missouri spent 12 months investigating until finally they were able to rescue these poor, tortured animals,” without mentioning any specific dates. The operation, the article adds, is “reportedly the biggest dog fighting bust in US history.” 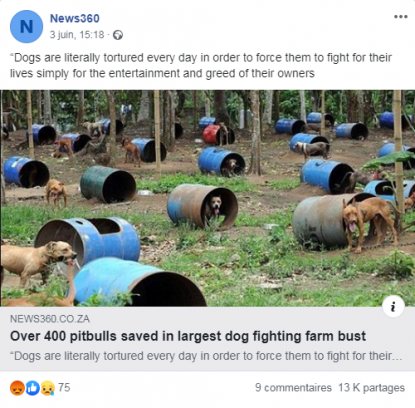 According to CrowdTangle, a social media monitoring tool, the article was shared more than 136,000 times, boosted by shares on animal rights-focused Facebook pages. 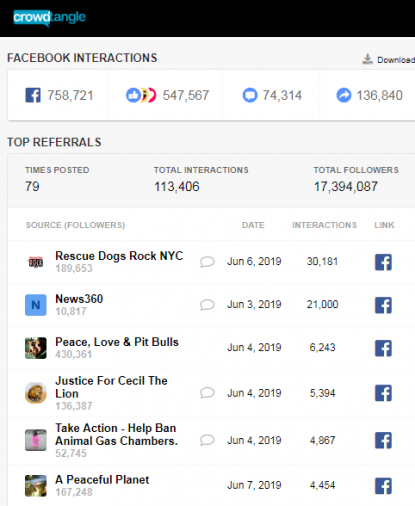 The article’s lack of specific dates may be because the largest dog fighting bust in the US took place ten years ago. In July 2009, a dogfighting sweep led to the rescue of nearly 500 dogs and the arrest of about 30 people in six US States. Here is a local press report from the time.

The raids and arrests were conducted in Missouri, Illinois, Iowa, Texas and Oklahoma, following a year-long investigation prompted by information gathered by the Humane Society of Missouri, an animal rescue and adoption centre, CBS reported in 2009. The dogs, mostly pit bull terriers, became known as the Missouri 500.

“This is old news, I don’t know why it’s resurfacing,” Jeane Jae, spokesperson for the Humane Society of Missouri, told AFP. To Jae’s knowledge, the 2009 bust remains the largest ever conducted in the US. “There have been a couple done by the SPCA that have come close but I still believe that this one involved the most animals,” she said.

A Google reverse image search revealed that the photo used to illustrate the dog bust story on Facebook is from a different event. The photo was taken in April 2012 in the Philippines by AFP photographer Ted Aljibe.

One hundred dogs were released in a sweep in Florida, just days after the News 360 article was published, but there is not evidence of a 2019 bust on the same scale as the 2009 operation in Missouri.

This sick giraffe is in South Africa, not Kenya as claimed online