Kenya investigations head says there is no detective by that name; photo claiming to show the body is an old image

An article claiming that a Kenyan detective assigned to probe a high-profile corruption case was killed and his body dumped on the outskirts of Nairobi has been shared hundreds of times on social media. Authorities, however, dismissed the claim as false while the image was first published at least two years ago.

On February 18, 2020, a short article published on this website (but later deleted) claimed that a detective named Roman Musyoki, who was probing a serious corruption case, had been killed. 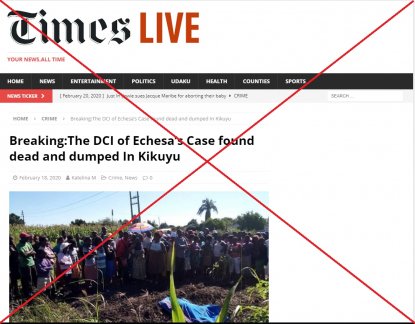 Screenshot of the misleading article, taken on February 26, 2020

The article was shared on a public Facebook group with more than 350,000 followers, attracting more than 250 shares and at least 850 comments and reactions. 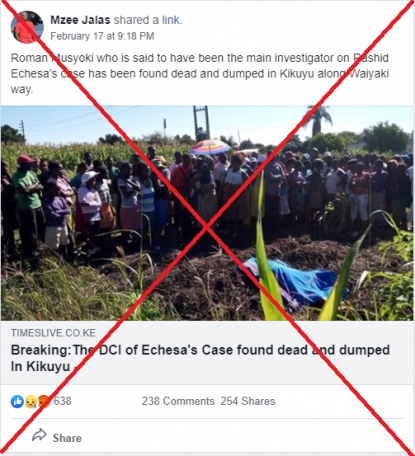 A Facebook page named News Update Kenya also shared the link (archived here) and later deleted it. The post had attracted more than 100 shares and 400 comments and reactions before it was deleted. 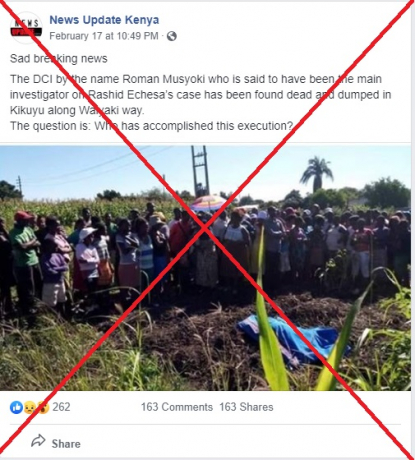 The same report was copied and pasted on this site.

The image in the report shows a crowd that appears to be viewing a shrouded body, identified in the article as Musyoki's.

Furthermore, the officer in charge of Kabete police station is reported to have confirmed the murder, saying that “the deceased may have struggled to death with unknown people. His body shows signs that he was badly torched before he was finally killed.”

Kenya’s Directorate of Criminal Investigations (DCI) is currently probing a multi-billion Kenyan shillings corruption case in which a former government minister is accused of having duped foreigners looking to secure tenders to supply military equipment.

AFP contacted Anthony Maina, the officer in charge of Kabete police station, who said he was on leave and had received numerous calls about the reported murder. He said the officer filling in for him hadn’t been interviewed by anyone about such an incident.

“When I asked the officer about the incident he told me the police station hadn’t received such a report,” Maina told AFP by phone.

Meanwhile, DCI Director George Kinoti said none of their detectives on the case been killed, nor did they have one called Roman Musyoki. “That’s fake news. Nothing like that happened,” Kinoti told AFP.

What about the image?

Using reverse image search engine TinEye, the photograph used in the original report and in subsequent Facebook posts can be traced to multiple reports on murder cases in Zimbabwe, some dating back to February 2018. 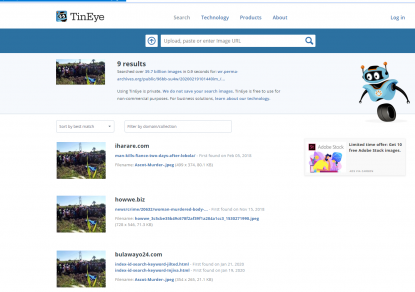 Though it is not clear when the image was first taken, it is at least two years old and therefore cannot show what the hoax article claimed.