A photo of a man in police uniform with his face covered in blood has been shared repeatedly in August 2019 Facebook posts alongside claims that a Hong Kong police officer was attacked by “terrorists” who threw corrosive liquid at his face. The photo has actually circulated online since at least 2014 and it shows an actor on a Hong Kong television show.

The post’s traditional Chinese language caption translates to English as: “Terrorists threw corrosive liquid at a police officer. His skin was severely burned. Let’s see which idiots will claim responsibility”. 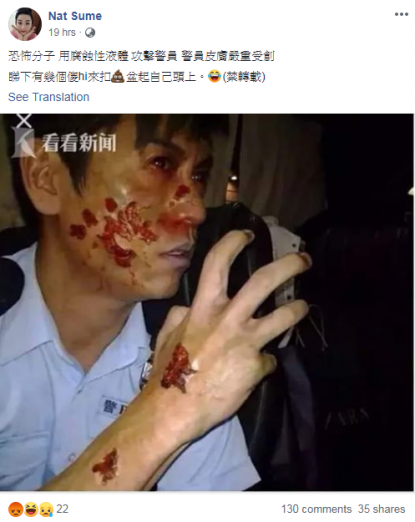 The photo was published one day after citywide strikes brought Hong Kong to a standstill and clashes erupted between pro-democracy protesters and police on August 5. Here is an AFP report about the protests.

The same photo was published here on Facebook alongside a similar claim in August 2019.

The photograph is being used in a misleading context -- it actually shows an actor on a Hong Kong TV show.

The same photo has circulated online since 2014 alongside similar claims, including here, here, here and here.

A reverse image search on Google found the image published in this October 2014 report by Hong Kong newspaper Ming Pao. The traditional Chinese language headline translates to English as: “Actor posts selfie for comparison with misleading photo of an injured police officer”.

The report states: “A photo purports to show an injured police officer has circulated online with netizens, including Information Coordinator Andrew Fung, buying into the false claim.

“HKTV shared the same photo on Facebook and clarified that it was taken by one of its special effects makeup artist. The photo shows actor Wu Kwing Lung on set of TV show ‘Night Shift’.

“Wu struck a similar pose in a selfie that he posted for comparison.”

Andrew Fung was the information coordinator for the then Hong Kong Chief Executive Leung Chun-ying.

HKTV, a TV-turned-e-commerce company in Hong Kong, shared the photo on its official Facebook page here on September 2, 2015.

The post’s traditional Chinese language caption translates to English as: “[Scary night] Remember this photo of Wu Kwing Lung that went viral last year, when people believed it showed a police officer who was injured in an attack? Why did Wu have this makeup on? What happened in the dark world? The mystery has been solved, click here to watch “Night Shift” finale.”

Wu, a Hong Kong actor, was among a list of actors named in this 2013 HKTV press release about the “Night Shift” show.