This ISIS executioner does not live in your neighborhood in Canada

A photo of an Islamic State group member standing next to a hostage claims that the pictured jihadist has severed thousands of heads, was pardoned by Canadian Prime Minister Justin Trudeau and now lives in Canada. The masked man in the photo is actually a British national known as “Jihadi John” who was killed in 2015.

An IS group executioner allegedly responsible for thousands of deaths is walking free in Canada after being pardoned by Trudeau, according to a meme shared several thousand times on social media. 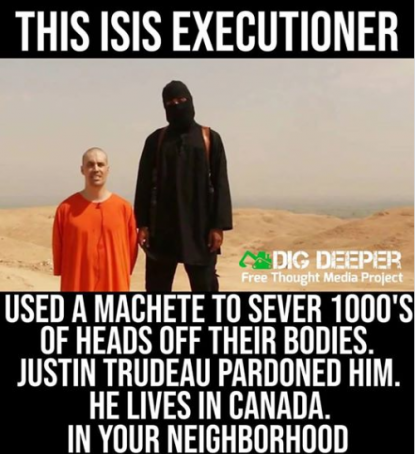 However, the man standing in the photo cannot be living in Canada, because he is dead.

The photo in the meme is a still frame of an official video published by an Islamic State group’s propaganda agency, Al Hayat, in 2014. It depicts late American journalist and AFP contributor James Foley, moments before his death by beheading.

Foley’s executioner, standing on the right in the photo, was identified by the US Department of Defence as Mohammed Emwazi, a British national better known as “Jihadi John.”

Emwazi was first reported dead by US officials in November 2015. His death was later confirmed in the January 2016 issue of ISIS magazine Dabiq, AFP reported at the time.

Government officials such as minister of public safety Ralph Goodale insist that there are consequences for returning fighters, but also point to the difficulties raised by the burden of proof in the prosecution of crimes committed abroad, particularly in war theatres.

The government says there are an estimated 60 Canadian citizens who left Canada and returned after being involved in terrorist activities overseas. Four have been charged and two have been convicted so far, Goodale said on December 13, 2018. You can read more from AFP Fact Check about how Canada handles individuals suspected of having worked for a terrorist organization abroad here.

Legitimate concerns about people who have engaged with terror groups outside of Canada are inapplicable to the man in the photo as he was not a Canadian national has not moved to Canada. He died in 2015 while still a member of the Islamic State group.