Multiple posts shared hundreds of times on Facebook and Twitter claim that the new Indonesian 75,000 rupiah banknote is only “merchandise” not legal tender, therefore it cannot be used for financial transactions. But the claim is false; the Bank of Indonesia says that the new banknote is legal tender.

The post shows two pictures of the newly issued Indonesian 75,000 rupiah banknote, alongside a long caption.

Below is a screenshot of a part of the misleading post: 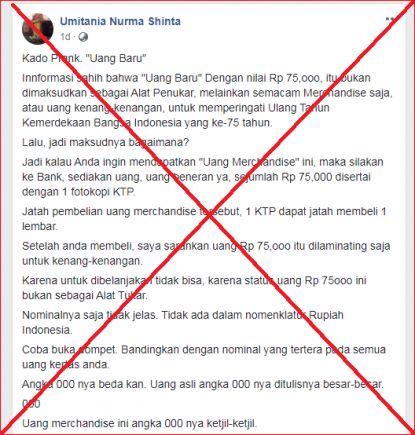 “Credible information says that the new 75,000 rupiah bill is not meant to be used as a Medium of Exchange, but rather it functions only as a kind of Merchandise, or memorabilia money, to celebrate the 75th anniversary of Indonesian independence.”

The Indonesian central bank, Bank of Indonesia (BI) issued a new Indonesian 75,000 rupiah bill on August 17, 2020, to celebrate the 75th anniversary of the Indonesian independence, hence it is also referred to as a “commemorative bill”.

But the claim is false; BI says that the new banknote is legal tender.

The Indonesian central bank said in a press briefing on August 18, 2020, that the new bill is legal tender and has the same function as the other existing banknotes.

At the 5:03 mark of the video, BI Deputy Governor Rosmaya Hadi can be heard saying: “The bill functions not only as a medium of exchange, but more importantly also a symbol of our national sovereignty.”

In a Q&A found here, Bank of Indonesia also says that the new banknote is a “legal tender” that can be used within the territory of Indonesia.

Furthermore, a sentence is printed on the back of the bill, which translates to English as: “BY THE GRACE OF GOD ALMIGHTY, THE UNITARY REPUBLIC OF INDONESIA HAS ISSUED RUPIAH AS LEGAL TENDER WITH THE VALUE OF SEVENTY-FIVE THOUSAND RUPIAH.”