An image of former US President Donald Trump with US attorney Lin Wood in the Oval Office has been shared in multiple Facebook posts alongside a claim it shows them meeting at the White House in April 2021. The claim is false: the image dates back to September 2020, when Trump was still US President.

It shows Trump and Wood at the Oval Office of the White House.

The post’s caption reads: “Lin Wood I was right. No Joey in the Oval Office. But I did run into our President of the United States. President Trump is hanging out and working in the office in which we re-elected him to serve in a historic landslide victory on November 3, 2020.” 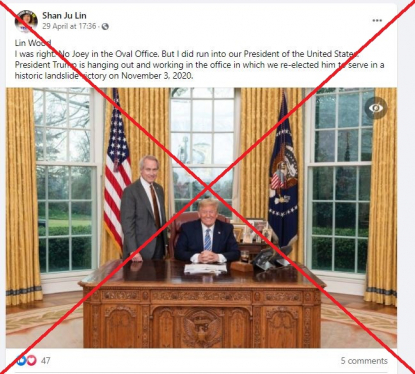 The post circulated online after Wood reportedly shared a series of posts and photos on the encrypted messaging app Telegram in April 2021, claiming that he recently saw Donald Trump "hanging out and working" in the Oval Office and suggesting that President Joe Biden was dead.

When asked by Newsweek why he shared the posts on Telegram, Wood responded that he has a “sense of humor.”

The image was shared in Facebook posts alongside a similar claim here, here and here.

A Google reverse image search of the image in the post found this archived tweet from Wood's account that was originally posted on September 5, 2020, when Trump was still US President.

“I met with @realDonaldTrump in the Oval Office at White House on March 11, 2020 at President’s request. I have not published photo earlier but thought today was good day to so do for context after leftist & Gannett attack article. Official White House Photo by Joyce N. Boghosian,” the tweet reads. 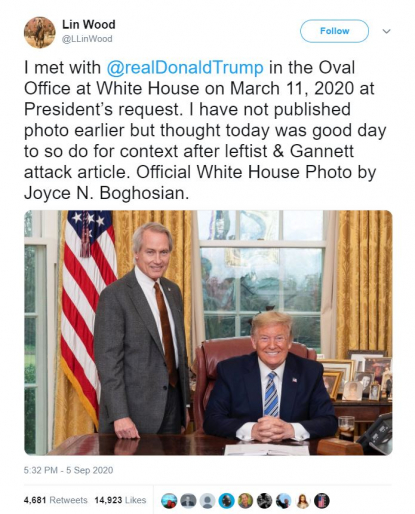 Another archived version of the tweet can be found here.

The image was shared on Wikimedia Commons. The caption states it was published on September 8, 2020.

Wood’s Twitter account has been permanently suspended since January 2021 after violating the platform’s rules, which include threatening or promoting violence, according to US magazine Newsweek.

Before his suspension, he had spread QAnon conspiracy and baseless claims about the 2020 presidential election, including saying Trump won the election, The New York Times reported.

As of May 11, 2021, there are no credible reports that Wood visited the White House or that Trump sat in the Oval Office in April 2021.

AFP Fact Check has also debunked a claim from Wood that Antifa, a far-left movement, stormed the US Capitol in January 2021.