A photo has been shared repeatedly in multiple posts on Twitter and TikTok alongside a claim it shows Myanmar security forces cracking down on anti-coup protesters in the city of Mandalay in February 2021. The claim is false: the image in fact shows a South Korean film released in 2007.

The photo was published on Twitter here on February 21, 2021.

The post’s Burmese-language caption translates to English as: “The inhumane acts by the military dictators today. During the violent crackdown that happened on Kannar Road in Mandalay this evening, [the forces] fired their snipers not only at protesters but also at social workers. The injured and dead people were pulled onto the police truck.” 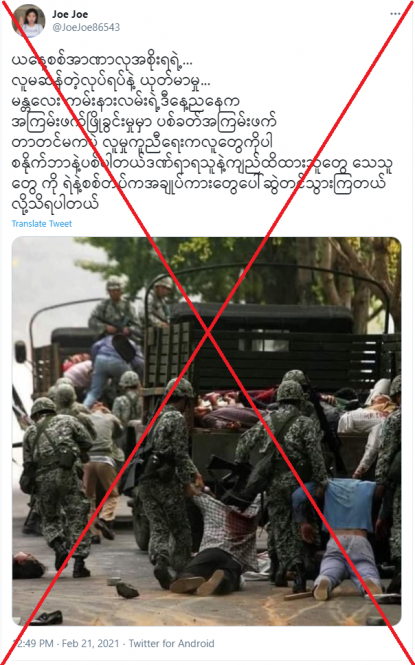 The post circulated online one day after two people, including a teenager, were shot by security forces during a crackdown on anti-coup protesters in Mandalay on February 20, 2021. AFP reported on the violence here.

The same image was also shared alongside a similar claim on Twitter here, here, and here and on TikTok here.

A reverse Google image search found the photo was published on a website called Asian Wiki blog here. The post is about a Korean film released in 2007 titled “May 18”. 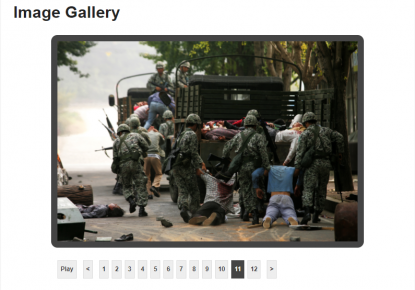 Screenshot of the Aisan Wiki blog post, taken on February 23, 2021

“May 18” details the Gwangju Uprising, which began on May 18, 1980 and resulted in several days of deadly clashes between anti-martial law protesters and security forces in the South Korean city of Gwangju.

Below is a screenshot comparison of the image in the misleading tweet (L) and the Asian Wiki blog image (R):

The image from the “May 18” film was also published on a Polish movie database site here.