Posts circulating on social media claim to show a photo of Queen Elizabeth II and Prince Philip bowing before the Ethiopian emperor and empress. This claim is false; the queen did not visit Ethiopia for the first time until 1965, a decade after the photograph in question was taken.

“Queen Elizabeth and Prince Philip bowing before Emperor Haile Selassie and his wife, Empress Menen Asfew. They are the only people they have ever bowed to as a royal couple (sic)”, reads the text within the screenshot.

Included is a black-and-white photo of Emperor Haile Selassie I and his wife, Empress Menen Asfaw. Two other people in the image — mentioned in the posts as Queen Elizabeth II and her husband Prince Philip — can be seen bowing to the Ethiopian royals, but only the backs of their heads are visible.

The same claim was also shared on Facebook here, here and here, on Twitter here, and on the official Facebook page of Kenyan journalist and radio host, Tongola Mate.

However, the tweet on which the claim is based could not be found after an advanced search of the “AfricaFactsZone” Twitter account, indicating it may have been deleted.

Did the queen break royal protocol?

In her 67 years on the throne, the queen has only ever bowed once, and it was not in Ethiopia before Haile Selassie and the empress, despite the claims made in the posts that “as far as is known Queen Elizabeth and Prince Phillip (sic) have never bowed before anyone else”.

The only time the queen broke this custom was during the funeral of Princess Diana in 1997, when she dipped her head to Diana’s casket as it passed, according to an article on the Daily Express website.

Moreover, the queen was never in Ethiopia at the time the picture was taken. When she finally did visit the country, Empress Menen had died a few years before and so could not have been in the same photograph.

By running a reverse image search, AFP Fact Check traced the original photo to a series by German-born American photographer and photojournalist Alfred Eisenstaedt. The original image is available on the Getty Images archive. 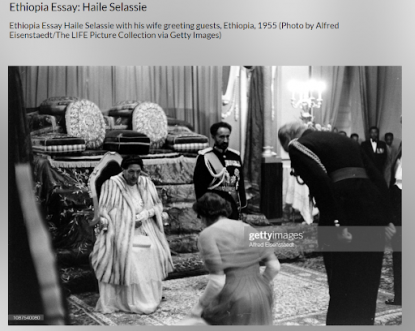 A screenshot of Eisenstaedt's photograph from Getty Images

The image is part of a series called “Ethiopia Essay” produced for LIFE magazine in 1955.

Solomon Yirgaw, a guide at the Addis Ababa University Museum, told AFP Fact Check that Haile Selassie moved into his “new official residence in 1963 shortly after his wife died”.

Eisenstaedt’s photos were taken in Haile Selassie’s old palace which is the Addis Ababa University today.

“The queen of England was received by the emperor in the new Jubilee Palace — known today as the National Palace — a few years after the death of Menen,” he said.

A search in the Buckingham Palace online archives revealed a few photos of the queen’s first official visit to Ethiopia, including this picture showing the emperor and the British monarch viewing the waterfalls of Lake Tana. 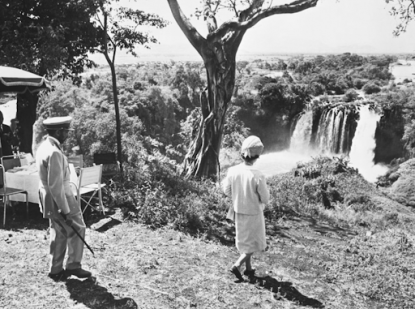 “HM The Queen and Emperor Haile Selassie looking at the view of the Tississat Falls at Lake Tana, Ethiopia, 7 Feb 1965 (sic),” reads the caption on the image.

Another search yielded a list of all of the outbound state visits made by the queen since her coronation in 1952, showing she was in Ethiopia from February 1 to February 8, 1965. These dates match the captions on the photos from the Buckingham Palace archives. 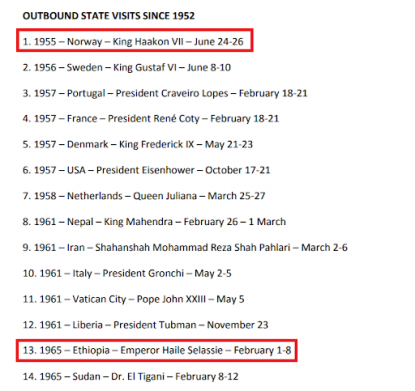 According to the same itinerary, the queen’s only state visit in 1955 —when Eisenstaedt took his pictures for LIFE — was to Norway.