This image shows a bus stop with a communist symbol in India, not Indonesia

An image has been shared hundreds of times in multiple posts on Facebook alongside a claim it shows a bus stop displaying a communist symbol in Indonesia's West Java province. The claim is false; the image shows a bus stop in the Indian state of Kerala.

The image was shared here on Facebook on January 1, 2021. It shows a bus stop designed to include a communist symbol, the hammer and sickle. 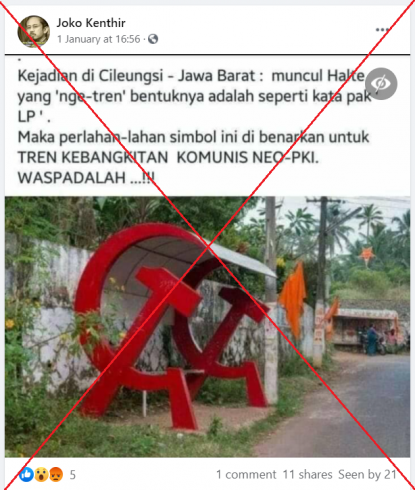 The Indonesian-language text superimposed on the image translates to English as: “The incident in Cileungsi - West Java: ‘trending’ bus stop, of which shape is like what Mr ‘LP’ said, appears.

“So, slowly this symbol is justified for the TREND OF NEO-PKI COMMUNIST RESURRECTION.
BEWARE ... !!!”

Cileungsi is a district in Bogor regency, in Indonesia’s West Java province.

In 2016, Luhut, then senior security minister, made a comment in which he appeared to downplay an incident in which two people were arrested for allegedly selling hammer and sickle T-shirts, local media reported.

According to Indonesian media outlet Detik.com, he said: “If there is only one or two T-shirts, this might be just a fashion trend among young people. We need to see, don’t overreact.”

“PKI” refers to the Indonesian Communist Party, which was banned following the anti-communist purge in 1965-66.

The same photo has appeared since at least 2016 on Facebook here, here and here, alongside a claim that the bus stop is located in Sukoharjo regency, in Central Java province. It has been shared more than 260 times.

The claims are both false.

A Google reverse image search found the original image was posted here on the website of stock photography agency Alamy in December 2015. 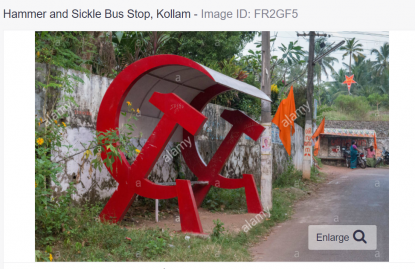 Kollam is a city in the Indian state of Kerala.

The Communist Party of India (Marxist) leads the ruling Left Democratic Front coalition in Kerala as of January 2021.

Below is screenshot comparison between the image in the misleading post (L) and the Alamy photo (R):