A photo showing former Sri Lankan prime minister Ranil Wickremesinghe pouring water into a pond has been shared multiple times in Facebook posts that claim it shows him performing a ritual for re-election in 2020. The posts circulated online after after the incumbent minister of health was mocked for performing a ritual that sought divine intervention to eradicate the novel coronavirus from Sri Lanka. However, the claim is false: the photo has circulated online since 2018 in reports about Wickremesinghe pouring blessed water into a pond in Maha Viharaya, a buddhist temple in Sri Lanka’s Anuradhapura, as part of a re-opening ceremony.

The photo was published here on Facebook on November 2, 2020.

The Sinhala-language post translates to English as: “That's blessed water... This is also blessed water... One is wishing for better times for the country... Other is in hope of positions (Presidency, Premiership)”. 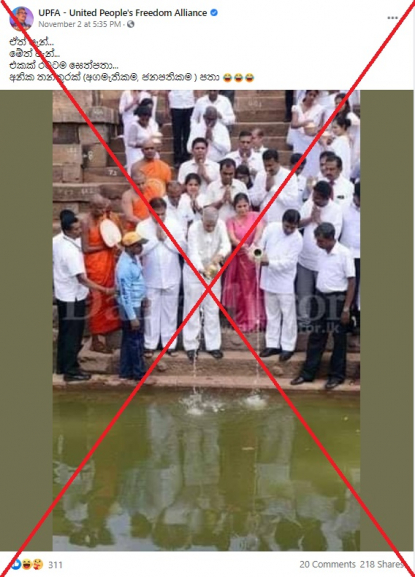 The posts circulated online after after the incumbent minister of health and other ministers were mocked for performing a ritual that sought divine intervention to eradicate the novel coronavirus from Sri Lanka.

The photo was also published here, here, here and here on Facebook alongside similar claims.

A reverse Google image search of the photo in the misleading posts found this report by Sri Lankan newspaper the Daily Mirror dated August 15, 2018. 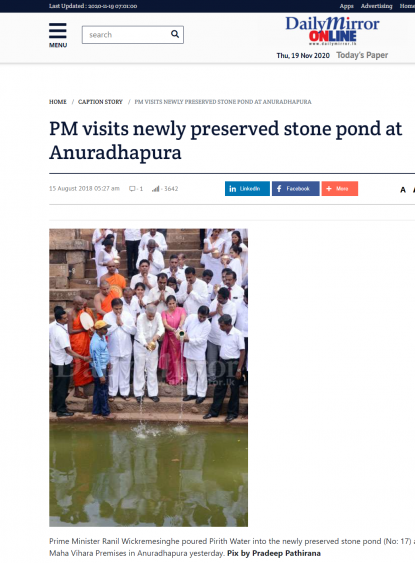 Screenshot of the August 2018 Daily Mirror report, captured on November 2020

"Pirith water" is water that has been blessed by Buddhist monks who chanting pirith -- a recitation of Buddhist scriptures to ward off evil.

Maha Vihara is a Buddhist temple in the Sri Lankan city of Anuradhapura.

Below is a screenshot comparison between the photo in the misleading post (L) and the Daily Mirror photo (R): 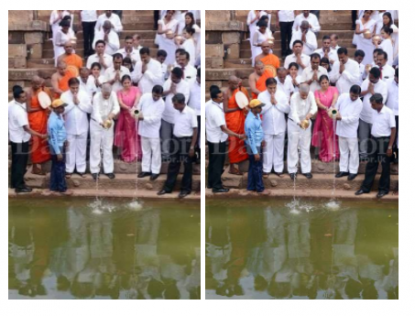 We will be rebuilding the Stone Wall and the Stone Pool at the Jaya Sri Maha Bodhi in Anuradhapura. It is important that we respect and protect our cultural and religious heritage. This is why we are following our plan to refurbish religious sites across the country. pic.twitter.com/qk5j2oBcCl