Skip to main content
Leader of the Liberal Party of Canada, Justin Trudeau, votes with his family in Montreal, Quebec on October 21, 2019 (AFP / Sebastien St-Jean)

A Facebook post claiming that Dominion ballot counting machines used for the 2020 US election were also employed for Canada’s 2019 federal vote, when Justin Trudeau was re-elected prime minister, has been shared thousands of times in English and French. This is false; Elections Canada uses paper ballots that are hand counted, and the independent federal agency said it has never used voting machines. 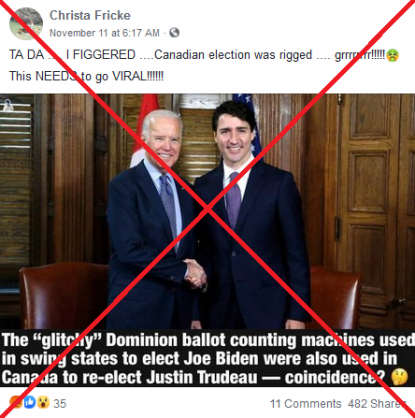 Other examples of the same image being shared can be found in English and in French. However, Elections Canada confirmed the claim is false.

“All ballots for Canadian federal elections are marked and counted by hand, in front of candidate representatives (scrutineers). We have never used automated vote tabulating machines,” a spokeswoman for Elections Canada told AFP in an email.

Elections Canada also tweeted on November 16, 2020 that the agency “does not use Dominion Voting Systems. We use paper ballots counted by hand in front of scrutineers and have never used voting machines or electronic tabulators to count votes in our 100-year history.”

US President Donald Trump falsely amplified that tweet to mirror his allegations that the Toronto-based company’s machines were defective, and that they led to massive fraud in the 2020 US election, which Trump lost. AFP Fact Check has debunked these allegations. 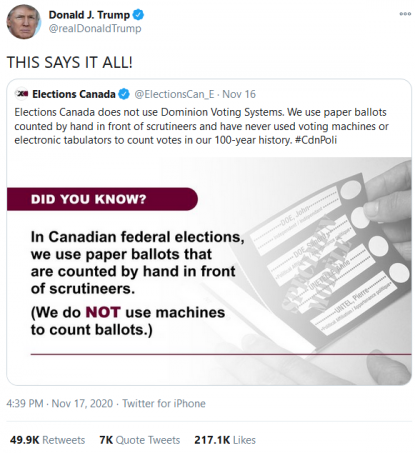 After many questions were asked on its Twitter account, Elections Canada replied that their original tweet was “intended to inform people who mistakenly believe we use those systems in federal elections and should not be construed as anything other than that.”

Dominion Voting Systems also tweeted and published a statement on the front page of their website to deny allegations of vote switching in the United States.

Headlined “Setting the record straight: facts & rumors,”  the company referred to a joint statement by US federal and state election officials who said they found “no evidence that any voting system deleted or lost votes, changed votes, or was in any way compromised.” 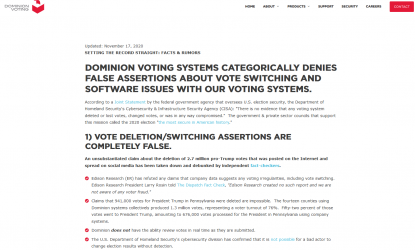 Screenshot taken on dominionvoting.com on November 20, 2020

Contacted by AFP, the company had not responded by time of publication.

Although the Dominion ballot counting machines have never been used in a Canadian federal election, they have been employed for local and provincial elections. And both the Liberal and Conservative parties have used Dominion to tabulate votes in their leadership races.

Trudeau’s Liberals won 157 of the 338 House of Commons seats in the October 2019 election, forcing them to seek the support of smaller parties after losing their comfortable 184-seat majority won in the previous vote.