A photo has been shared tens of thousands of times in multiple posts on Facebook and Twitter that claim it shows an image of snow under a microscope. The claim is false: the image has been manipulated from a photo of an artwork by artist Rogan Brown.

The image was shared by an Australian-based Facebook user here. The post has been shared more than 18,000 times.

A screenshot of the misleading image, taken January 19, 2020.

The post’s caption reads “Check out this amazing Photograph of Snow Under The Microscope. Jaw-Dropping glimpse into Nature's hidden perfection”.

The image is actually a cropped and rotated photo of an artwork titled “Magic Circle Variation 5” by artist Rogan Brown.

Below is a comparison of a correctly oriented screenshot of the image used in the Facebook post (L) and a screenshot of Brown’s artwork (R). 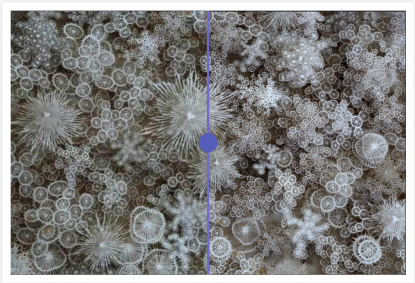 Brown told AFP that while all of his works are “inspired by microscopy”, his artwork Magic Circle Variation 5 is neither a photo of, nor inspired by “snow under a microscope”, as claimed in the misleading posts.

“The Magic Circle series began as part of a collaboration with UK scientists working on the Human Microbiome project,” he said in a January 20 email. “I was commissioned by the Wellcome Trust to make pieces that reflected on that project.

“The microbiome refers to the vast colony of bacteria that lives in and on our bodies. Scientists are only beginning to identify the huge range of bacteria that the microbiome comprises. My aim in the artworks was to find a visual paradigm for communicating the texture and diversity of this little known invisible world.”

Brown went on to say that his artworks have been misrepresented online before.

“My work plays with the dynamic between science fact and science fiction; I’m fascinated by the way these two merge and become confused in the popular imagination,” he said. “The internet promotes this confusion more than any other medium because scientific imagery is constantly reposted divorced from its original context, often being reposted for its aesthetic value alone”.

Images of snowflakes taken by electron microscopes compiled by the United States Department of Agriculture Beltsville Agricultural Research Centre have been published here, here and here.