A video has been viewed tens of thousands of times in multiple posts on Facebook, Twitter and Weibo alongside a claim it shows an electric car made by US technology company Apple. The claim is false; the footage is actually a digital animation created by a special effects artist on Chinese video platform Douyin, who told AFP that her team superimposed the Apple logo onto the car.

The video was published here on Chinese social platform Weibo on January 5, 2021. It has been viewed more than 80,000 times, and shared more than 100 times. 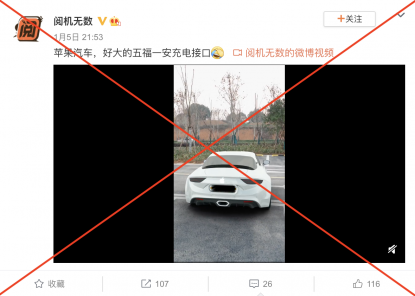 The post's simplified-Chinese caption translates to English as: “Apple car, such a huge 5V/1A charging cord”.

The 5V/1A charging cord is the lightning connector for iPhone, iPad and iPod.

The video purports to show an electric car, labelled as a product from Apple, being charged with a cable.

Apple approached Hyundai, a South Korea automaker, to discuss a potential partnership to develop electric cars and batteries for them, as reported here by AFP on January 8, 2021.

The video was also shared on Facebook here; on Twitter here, here and here and on TikTok here with a similar claim.

A reverse image search on Google found the same video published here on Douyin, the Chinese version of TikTok. It was shared on an account for a special effects artist known as Ou-mi on January 4, 2021. 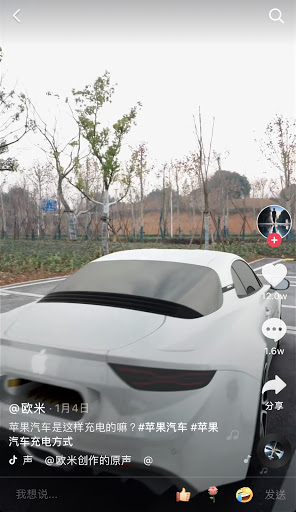 A screenshot of the original video on Douyin.

The video was titled: “Is this how Apple electric cars are charged?”

Below is a screenshot comparison of the misleading post (L) and the Douyin video (R):

A screenshot comparison of the misleading post and the Douyin video.

In response to a comment from an AFP journalist on her post, the artist said in a Douyin live broadcast on January 15, 2021 that the video does not show a genuine Apple product.

"It's me who played around in that video, and the special effect was created by my team. We just found a random car, and added the Apple logo onto it,” the artist told AFP through WeChat on January 18, 2021.

Apple aims to release its electric car in 2024, as reported here by news agency Reuters. 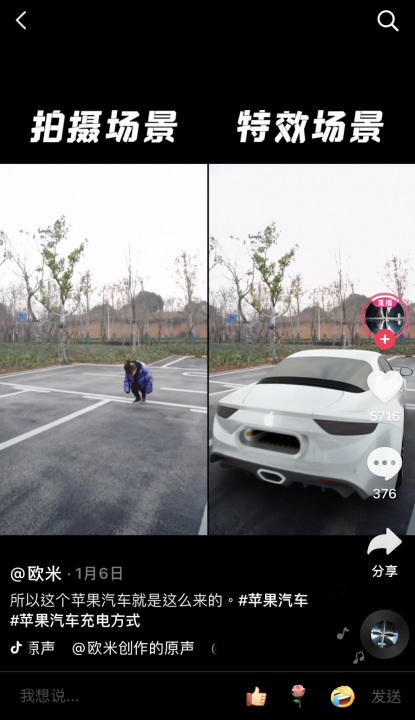 A screenshot, taken on January 15, 2021, of the breakdown video on Douyin. 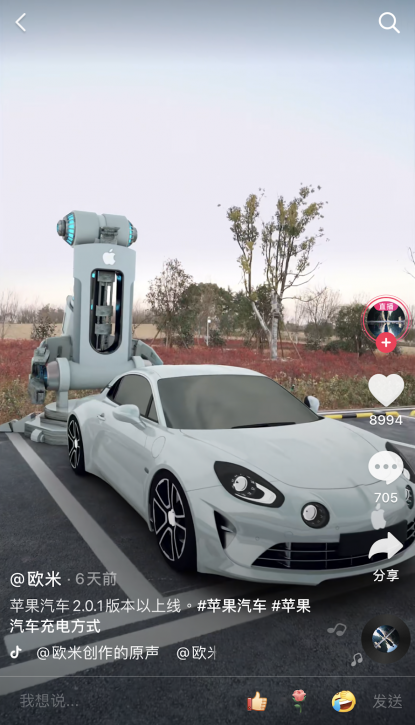 A screenshot, taken on January 15, 2021, of another version made by the artist.