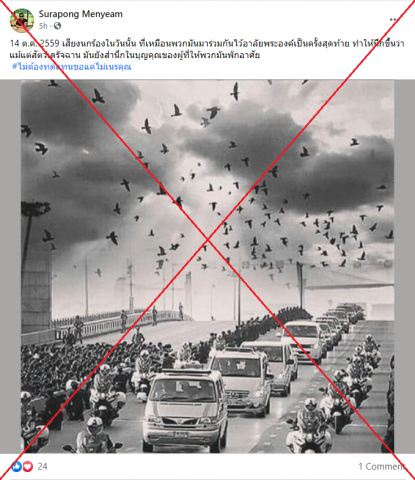 The post’s Thai language caption translates to English as: “The sound of birds that day are like they have gathered for a final farewell to His Majesty - makes me think that even animals are grateful for one who let them stay.”

The post circulated just a day after the fourth anniversary of the death of King Bhumibol Adulyadej, who died at the age of 88 on October 13, 2016, as AFP reported here.

The image, however, has been digitally manipulated and combines two different photographs.

A Google reverse image search found the bottom half of the image shows a photo or screenshot of Bhumibol’s funeral procession on October 14, 2016. The image corresponds to the 1:23:27 mark of this YouTube video of the procession published by Thai PBS, a state-affiliated broadcaster. 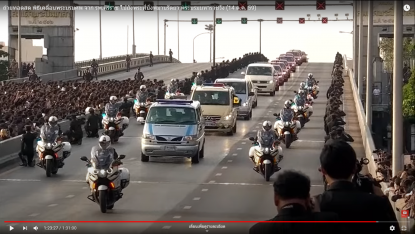 Below is a screenshot comparison of the doctored image in the misleading post (L) and the Thai PBS Youtube video (R):

Screenshot comparison of the doctored image in the misleading post (L) and the Thai PBS Youtube video (R):

A separate Google reverse image search found another version of the flock of birds image that was used in the doctored image.

The photo was published on a Thai Facebook here on October 19, 2016.