Skip to main content
A rickshaw puller takes a nap while waiting for passengers in a queue along a busy road in Kolkata on September 2, 2020. (AFP / Dibyangshu Sarkar)

A video showing a man crying inconsolably as his rickshaw is seized by local authorities using a mechanical digger has been viewed hundreds of times in Facebook and Twitter posts that suggest the incident took place in India. The claim is misleading: the video actually shows an eviction drive in Bangladesh’s capital city of Dhaka on October 5, 2020. 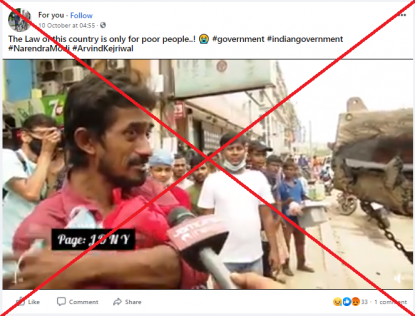 The post’s caption reads: “The law of this country is meant for the poors only..! #government #indiangovernment #NarendraModi #ArvindKejriwal”.

The crying man in the video can be heard saying that he would commit suicide by tying a rope around his neck when asked by the reporter what he will do now in Bangla, the national language of Bangladesh that is also spoken in the neighbouring Indian states of West Bengal and Tripura.

A close examination several billboards in Bangla and a "Jamuna News" logo on the red mic seen the video are highlighted in green in the video screenshot below: A keyword search on Google found this YouTube channel of Jamuna TV, a 24-hour TV news channel in Bangladesh.

A longer video report that contains the same footage published in the misleading posts was found published here on the YouTube channel on October 6, 2020.

“Now I will tie the rope around my neck; screams the rickshaw puller,” reads the video's Bangla description.

Below is a screenshot comparison of the video shared in the misleading post (L) and the YouTube video (R): 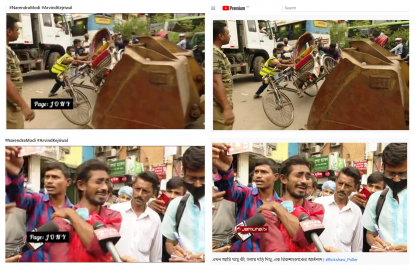 A further investigation of the video found several clues that show the video was shot in the Dhanmondi area of Dhaka. For example, "South City Corporation" is written in Bangla on the JCB machine and a sign for "Minor Cafe" is seen in the background.

Below is a screenshot with the text highlighted in red: 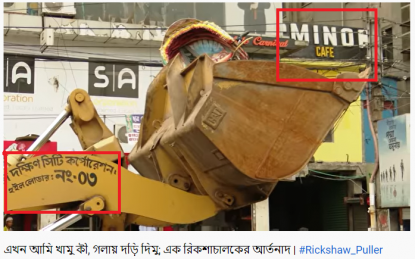 A keyword search on Google found the website of the South City Corporation, a local administrative civic body in Dhaka. The cafe sign seen is for a cafe called ‘C Minor Music Cafe’, which is located in Dhanmondi, Dhaka.