The image is a composition of two different photographs

An image purporting to show “The Crocodile Hunter” star Steve Irwin and American rapper Tupac Shakur posing together has been shared in multiple Facebook posts. However, the image has been doctored; it was created by combining two different photographs.

“Tupac and Steve Irwin smiling. That has to make you smile,” the caption reads.

Tupac Shakur, who is better known by his stage name 2Pac, was a celebrated rapper and actor. He was killed in a drive-by-shooting in 1996.

TV wildlife expert Steve Irwin was known for his “Crocodile Hunter” show, which made him an Australian icon across the world. He was killed by a stingray while filming in 2006. 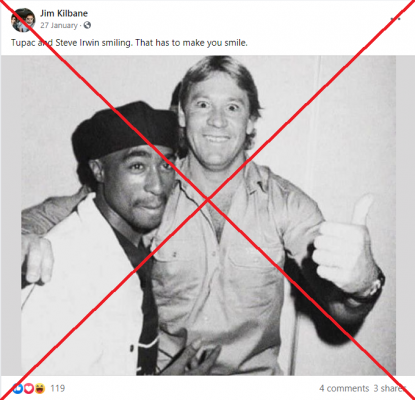 The image has been circulating online for several years, including here on a Facebook page called “Historical Pictures” and here on a page called “Vintage Facts”, which has more than 300,000 followers.

A Google reverse image search of Shakur’s picture in the post resulted in this image on movie database IMDb.

The image shows Shakur with actor and director Laurence Fishburne and singer Janet Jackson at an event for 1993 movie “Poetic Justice.

Below is a comparison between the misleading image (L) and the IMDb photo (R):

A Yandex reverse image search of Irwin’s picture in the misleading image resulted in this image on eBay and this 2006 post on meme site YTMND.

Below is a comparison between the misleading image (L) and the photo published on eBay and YTMND (R):

Conspiracy theories about Shakur's death and reported sightings of the late rapper have continued to surface since his assassination. AFP debunked a photo falsely purporting to show him living under a new identity in Lesotho.