Skip to main content
A paramilitary police officer (down) wearing a face masks as a preventive measure against the Covid-19 (novel coronavirus) talks on his radio transmitter as he stands in front of the portrait of late communist leader Mao Zedong at Tiananmen Gate in Beijing on October 13, 2020. (Photo by NICOLAS ASFOURI / AFP)

An image circulating on social media purports to show an Instagram post about the Tiananmen Square massacre being fact-checked by the Chinese government. The claim is false; a spokesperson for Facebook, which owns Instagram, said the Chinese Communist Party is not part of its third-party fact-checking programme. Both Facebook and Instagram are blocked in mainland China. 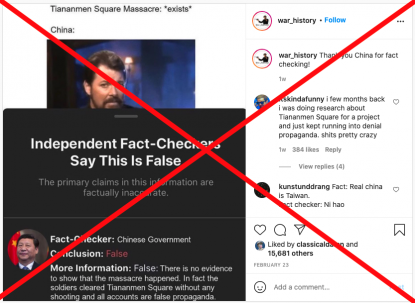 The image features text superimposed above an image of Beyond Belief: Fact or Fiction host Jonathan Frakes which says: “Tiananmen Square Massacre: *exists*”

Below the image what appears to be a fact check notice from the “Chinese Government” reads:

"Conclusion: False… There is no evidence that the massacre happened. In fact the soldiers cleared Tiananmen square without any shooting and all accounts are false propaganda."

Beijing's city government claimed weeks after the deadly 1989 Tiananmen Square crackdown that around 200 people had died, the vast majority soldiers, with only 36 university students killed.

China's central government has never released a full official toll, but estimates from academics, witnesses and human rights groups have put the figure between several hundred to more than 1,000, according to a report from the UK public broadcaster BBC.

Open discussion of the brutal suppression is forbidden in mainland China.

The post was uploaded to multiple satire accounts, see other examples here and here. However, multiple users commented on the posts asking whether the image was real.

One user asked “is this legit”, while another replied to the comment with “I’d like to know the same. Disturbing to see this”.

The image, however, is not authentic.

Contacted by AFP, a spokesperson for Facebook confirmed that both Facebook and Instagram are not available in China and said that the Chinese Communist Party is not a member of its third-party fact-checking programme.

“We work with independent third-party fact-checkers to review and rate the accuracy of content on Facebook. These partners have been certified through a non-partisan International Fact-Checking Network (IFCN),” the spokesperson said.

The IFCN is a unit of the US-based non-profit journalism school the Poynter Institute.  AFP Fact Check is an accredited member of the IFCN fact checking network and a signatory to IFCN’s code of principles.

As part of the programme, more than 80 independent fact-checking services work to monitor and debunk misinformation on Facebook and Instagram.