This image is an AFP photo that shows a dog culling in 2015 in Pakistan, not Myanmar

An image showing dozens of dead dogs has been shared thousands of times on Facebook alongside claims the animals were killed by soldiers in Myanmar as part of a crackdown on protests following the military coup on February 1, 2021. The claim is false; the photo is an AFP image of dogs culled in 2015 by officials in Karachi, Pakistan. 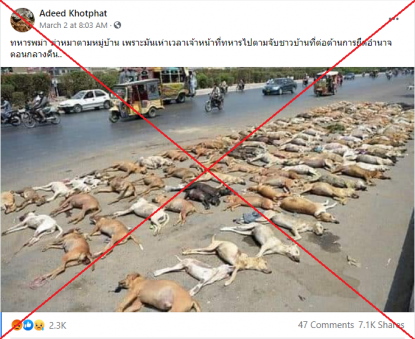 The post’s Thai caption reads: “Dogs around villages are being killed by the Myanmar military because they bark when soldiers arrest citizens who oppose the coup during the night.”

The post circulated as Myanmar’s military continues raids against anti-coup protesters who have been demonstrating against the military's seizure of power on February 1, 2021.

The United Nations said it has verified at least 54 deaths since the coup -- though the actual number could be far higher -- and that more than 1,700 people have been detained.

The image was also shared alongside similar claims here, here and here on Facebook.

The photo is in fact an AFP image that shows the aftermath of a culling in the Pakistani city of Karachi in 2015. The photo was published by AFP here on May 12, 2015. Screenshot of the original AFP image

The photo’s caption reads: “Pakistani commuters drive past a pile of dog carcasses at the road side in Karachi on May 12, 2015. The city municipality has launched a campaign to eliminate stray dogs whose numbers are increasing alarmingly.”

Below is a screenshot comparison between the photo in the misleading Facebook post (left) and the original AFP image (right):

The photo was also published in an editorial by The Nation, an English-language newspaper in Pakistan, here on May 17, 2015

“Karachi has just had a mass poisoning campaign of stray dogs, whose carcasses can be seen lined at the side of a main road,” the article reads.