A photo of tens of thousands of people gathering with red flags has been shared repeatedly on Facebook and Twitter alongside a claim that it shows a joint rally organised by the Indian National Congress party and communist parties in the Indian city of Kolkata on February 28, 2021. The claim is false: the photo in fact shows a 2019 rally organised by Indian communist parties in Kolkata ahead of the 2019 general elections.

The photo was published on Facebook here on February 28, 2021. 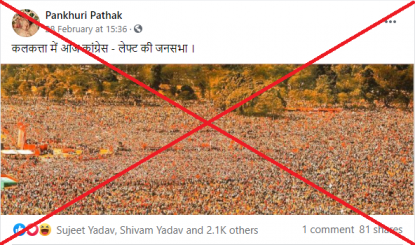 The post’s Hindi-language caption translates in English as: “Today's public rally called by Congress and Left.”

The post refers to a recent rally that was organised by India’s main opposition Indian National Congress (INC) party and the Communist Party of India - Marxist's (CPI-M) Left Front.  The rally was held on February 28, 2021, in Kolkata, the capital city of West Bengal state, ahead of the state's assembly election, as reported here by The Indian Express.

The image actually shows a rally that was organised by Indian communist parties in Kolkata in February 2019 ahead of the country's general elections.

A reverse image search on Google found the same photo was published on Twitter by the CPI-M’s West Bengal unit here on June 11, 2020.

“You can cut all the flowers but you cannot keep Spring from coming.”

“‘You can cut all the flowers but you cannot keep Spring from coming.’ A bird eye view of last year Birgade Rally at #Kolkata,” reads the tweet.

Below is a screenshot comparison of the photo shared in the misleading Facebook post (Top) and the photo tweeted by the CPI-M (Bottom) with identical elements highlighted in yellow by AFP: 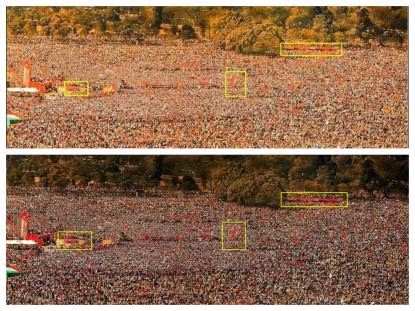 A further search found that a similar image was published on stock photo website Alamy here. According to the caption, the picture was taken on February 3, 2019.

“Left activist from different part of state take part in the Left front Brigade rally ahead of General Election 2019,” says the caption. The photo credit is given to “Saikat Paul/Pacific Press/Alamy Live News”.

A photo gallery published by Social News on February 3, 2019, also includes the same image. The image has been credited to IANS and the caption reads: "Kolkata: Workers of leftist parties participate in a Left Front rally at the Brigade Parade ground in Kolkata on Feb 3, 2019."

Similar photos from the rally were published here in a report by media outlet Peoples Dispatch and here on the website of the CPI-M-run weekly newspaper People’s Democracy in their February 10, 2019 issue. 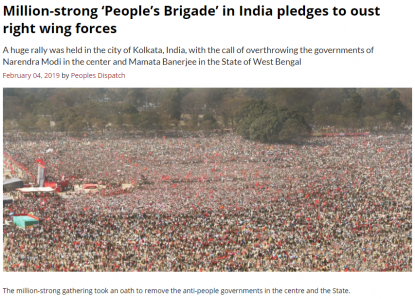 Screenshot of the similar image published by local media