An image of Kenya's President Uhuru Kenyatta holding a placard inscribed with the words “#NoMore” is being shared in Facebook posts with a claim that he has joined an Ethiopian social media campaign against Western “interference” in the warring country. The claim is false; the image has been digitally manipulated, and the original picture was taken in 2017 when Kenyatta won the elections.

A Facebook page with more than 40,000 followers shared the image of Kenyatta in a post with a caption that reads: “Kenyatta join #Nomore movement (sic)”. 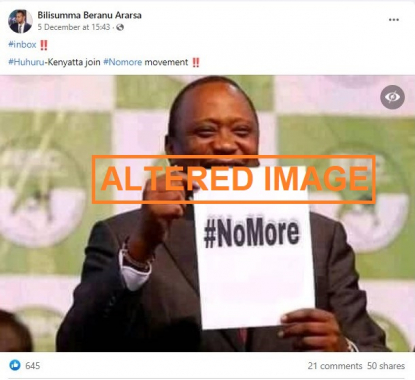 The same post was shared here, here and here.

But the image has been digitally manipulated, and the original is unrelated to the Ethiopian social media campaign.

A reverse image search shows that the original photo was taken by a Reuters photographer on October 30, 2017 (see here), after the Kenyan leader was declared the winner of the presidential elections.

A screenshot of the Reuters image, taken on December 14, 2021

The paper in Kenyatta’s hands was the official certification of his election victory.

While Kenyatta has been involved in regional mediation efforts in Ethiopia’s year-long conflict that has left thousands dead and about two million displaced, there is no evidence that the Kenyan president joined the #NoMore movement.

In November 2021, a group of Ethiopian activists led by journalist Hermela Aregawi launched a campaign on Facebook called “#NoMore”, which called for an end to the West's “meddling” in the region's affairs.

“In November, we say No More. No More war in Ethiopia. No More false media narratives that support killers over victims. No more fueling wars in Africa. No More destructive US intervention (sic),” reads the caption to Aregawi’s video.

The campaign criticised the international community’s call for a ceasefire to the civil war and the West’s perceived interference in Ethiopia.

Fighting in Ethiopia began a year ago when Ethiopian Prime Minister Abiy Ahmed sent troops into the Tigray region to overthrow its ruling party, the Tigray People's Liberation Front (TPLF). Abiy claimed the move was in response to TPLF attacks on federal army camps and promised a swift victory, but by late June the rebels had retaken most of Tigray, including its capital Mekele.

The #NoMore campaign has since spread globally beyond the hashtag with groups criticising foreign interventions, terming it as neocolonialism (see here, here and here).

Abiy’s spokeswoman Billene Seyoum accused Twitter of holding a “pro-rebel bias” and told AFP last week that a formal complaint had been sent to Twitter.

AFP Fact Check previously debunked a claim circulating on Facebook that Ugandan President Yoweri Museveni and UK Prime Minister Boris Johnson met recently, which some social media users criticised in light of the #NoMore movement. But the photo of the two leaders was taken in 2018.