A photo of Ugandan President Yoweri Museveni and UK Prime Minister Boris Johnson has been published alongside a claim that the two leaders met recently. The post criticises the meeting in light of the November 2021 #NoMore social media campaign in Ethiopia, which has called for the end of Western “meddling” in the ongoing conflict in the country. But the claim is misleading: the photo was taken in 2018 when the two men met at Lancaster House in London. 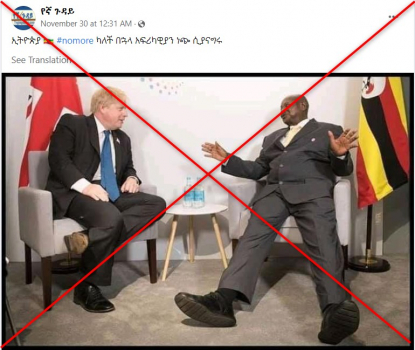 Written in Amharic, the caption translates to: “After Ethiopia said #nomore, here are Africans speaking with whites.”

Comments on the recent Facebook post appear to indicate that social media users believed that the meeting between Johnson and Museveni occurred in 2021 in the aftermath of the #NoMore campaign.

One of the comments written in Amharic reads: “This is an occasion that should be kept for history (sic).”

According to local media, the #NoMore hashtag started trending on Twitter and Facebook in Ethiopia in November 2021 after social media movement started by a group of activists, led by journalist Hermela Aregawi.

“In November, we say No More. No More war in Ethiopia. No More false media narratives that support killers over victims. No more fueling wars in Africa. No More destructive US intervention (sic),” the caption to Aregawi’s video reads.

The campaign, spread on social media by Ethiopian Prime Minister Abiy Ahmed’s press secretary, criticises the international community’s call for a ceasefire to the civil war and the West’s perceived interference in Ethiopia. Fighting in Ethiopia began a year ago when Tigrayan rebels attacked federal military bases in the northern part of the country. In response, Abiy sent troops to the region.

The #NoMore campaign has since spread to other African countries. Beyond the hashtag, Ethiopians have been protesting around the world against foreign intervention in Ethiopia, with protests in the US and France.

Abiy’s spokeswoman Billene Seyoum accused Twitter of holding a “pro-rebel bias” and told AFP that a formal complaint was sent to Twitter.

But, the post’s photo is taken out of context. It does not show Johnson meeting Museveni in the aftermath of the campaign.

Image used out of context

By conducting a reverse image search, AFP Fact Check found that the image was taken in April 2018 during a bilateral meeting at the Commonwealth Heads of Government Meeting. At the time, Johnson was serving as foreign secretary under Theresa May, eventually succeeding her as prime minister in July 2019.

The image, available in the Alamy photo archives, is credited to photographer Stefan Rousseau. 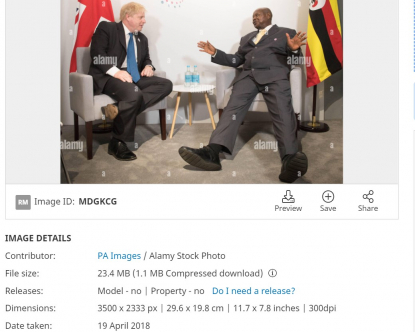 Screenshot of the original photo on the Alamy photo archives, taken December 2, 2021