Footage that appears to show a figure hovering in the sky has been viewed tens of thousands of times in social media posts that claim it shows a mysterious creature in Yemen. The claim is false; the video is a digital creation by a Brazilian artist.

The video, which appears to show a figure floating in the clouds, has been viewed more than 55,000 times on Facebook after it was posted on November 29.

"Sky creature has been seen in Yemen. Praise be to Allah. Allah have mercy on this world," the Urdu-language Facebook post reads. 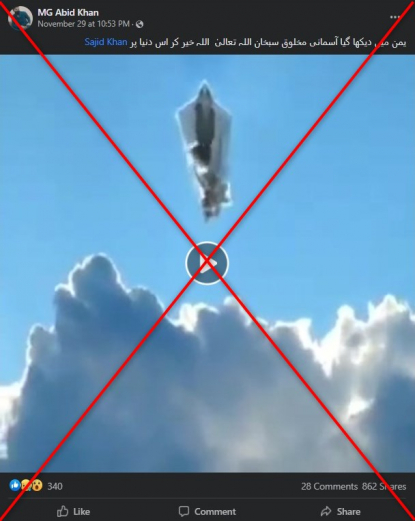 The same video was shared in similar Facebook posts here, here and here.

A reverse image search of the video's keyframes on Google found the original video posted on YouTube on July 26, 2019.

It was uploaded to the channel of Jessen Carlos, who describes himself as a self-taught artist who uses animation and special effects.

In another YouTube video, Carlos demonstrated how he created the animation.

Below are screenshots from Carlos's explainer video.

Screenshots from Carlos' explainer video showing how he created the animation.

AFP previously debunked various animations falsely passed off as real life on social media, including of a purported space collision, a hurricane in Oman and a new species of coral discovered in the Galapagos Islands.