Skip to main content
Demonstrators hit a police car during a protest against Covid-19 regulations in Melbourne on September 21, 2021. ( AFP / STR)

After violent protests against Covid-19 vaccine mandates in Melbourne, social media posts claimed police used a sonic weapon to make demonstrators soil themselves. The claim is false; the posts used a photo from a 2018 prank video by an Australian YouTuber. An acoustic weapons expert told AFP it was "improbable" that infrasound technology could have the effect described in the posts. There have been no official reports that Victoria police used sonic weapons at the protest.

"Victorian Police were the first force in Australia to deploy the so-called ‘Brown Note Acoustic Weapon’," reads an Instagram post on November 20, 2021.

"The brown note is an infrasonic frequency that causes humans to lose control of their bowels due to resonance. This also causes the loss of bladder. Why isn’t the MSN reporting this #freedom #Melbourneprotest."

The image in the post appears to show a man with soiled trousers. 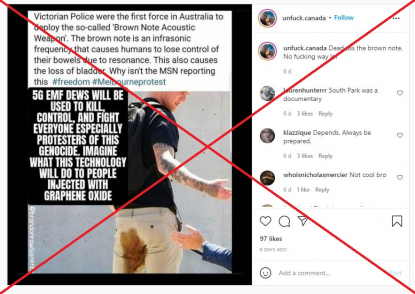 The post also claims that 5G technology "will be used to kill, control, and fight everyone" and that people are being "injected with graphene oxide" -- a reference to Covid-19 vaccines.

AFP has debunked similar false claims during the pandemic here and here.

Some social media users appeared to be misled by the post.

"They are using weapons of war against their own citizens. This is evil," one person commented.

"That’s sick and so sad," another wrote.

The photo featured in misleading posts was taken from this prank staged by Australian YouTuber Luke Erwin in 2018.

In the clip, Erwin pretended to soil himself in public, prompting stunned reactions from onlookers.

"Due to the violent nature of the group, police were forced to use crowd control equipment including pepper balls, foam baton rounds, smoke round and stinger grenades which deploy rubber pellets," a Victoria Police spokesperson told AFP.

In response to the claim in the social media posts, Jürgen Altmann, a researcher and lecturer in physics at TU Dortmund University in Germany, said: "It is improbable that infrasound emitted in the open could have such an effect."

He said his research found no concrete evidence that an infrasound weapon can cause someone to lose control of their bowels.

"There were several allegations about infrasound effects on the body, in particular vomiting and uncontrolled defecation, but none of them were observed in animal and human testing," he told AFP.

"I am not aware of any new research that would contradict these findings."