Skip to main content
A person poses holding a mobile telephone the camera showing a sign advertising 5G mobile telecommunication in a shop in London on January 28, 2020. (AFP / Justin Tallis)

No evidence that 5G radiation is harmful to human health, experts say

A graphic purporting to detail health risks due to 5G-induced radiation has been published on various websites and shared hundreds of times on Facebook and Twitter. The image was shared as other hoaxes circulated claiming that COVID-19 is linked to the global rollout of 5G networks. The claim is misleading; radiation experts and health authorities maintain there is no evidence to suggest that the radiation emitted from 5G is harmful to human health.

The graphic was shared almost 100 times since it was published on Facebook here on April 10. It was posted on a Facebook page titled “We Say NO To 5G in Australia”, which has more than 18,000 followers.

ELF EMF “exist wherever electricity is generated, transmitted or distributed in powerlines or cables, or used in electrical appliances,” according to the Australian Radiation Protection and Nuclear Safety Agency. 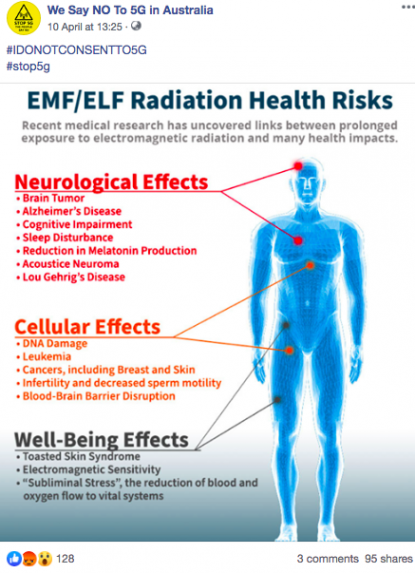 The graphic was also shared alongside similar references to 5G on Facebook here, on Twitter here and on various websites here and here.

The claim circulated as conspiracists promoted a similar theory that the COVID-19 pandemic is linked to the development of 5G, which has been rolled out around the world since 2019. The hoax resulted in 5G masts and cellular broadcasting towers being vandalised in the UK and the Netherlands.

The claim about 5G radiation is also misleading.

All mobiles phones “operate in the radiofrequency range of the electromagnetic spectrum, from several hundred MHz to several GHz, to enable wireless phone calls and data transfer," according to the International Commission on Non-Ionizing Radiation Protection (ICNIRP), an global organisation tasked with protecting the public and the environment from radiation.

Like radios, TVs and microwaves, mobile networks do emit non-ionizing radiation at levels that are not harmful to human health, experts maintain.

“There are not any adverse health effects caused by exposure to 5G,”

“A considerable amount of research has also been conducted on the relationship between RF EMF fields and other outcomes such as headaches, concentration difficulty, sleep quality, cognitive function, cardiovascular effects, etc. To date, this research has not shown any such health effects," the ICNIRP added.

5G networks, which use higher-frequency radio waves to increase the speed of data transmission, have also been deemed safe.

The World Health Organization (WHO) also maintains that "unlike ionizing radiation such as X-rays or gamma rays," the electromagnetic fields created by mobile networks can "neither break chemical bonds nor cause ionization in the human body."

"A large number of studies have been performed over the last two decades to assess whether mobile phones pose a potential health risk. To date, no adverse health effects have been established as being caused by mobile phone use," the WHO states.