Facebook posts claiming to show the arrest of a Kenyan police officer linked to the chaos witnessed at a recent political rally of Kenya's deputy president William Ruto in the country’s Nyanza region have been shared more than a hundred times online. The claim is false; the image is old and shows a policeman arrested in 2019 during an anti-corruption blitz.

On November 10, 2021, this Facebook post shared an image of a uniformed Kenyan policeman in handcuffs and a caption that reads: “Seargent Robert Kimeto, an officer attached to Londiani Police station arrested with two cartons of teargas canisters. He was one of the officers who started throwing teargas canisters at peaceful Kondele residents today during a DP Ruto rally (sic).” 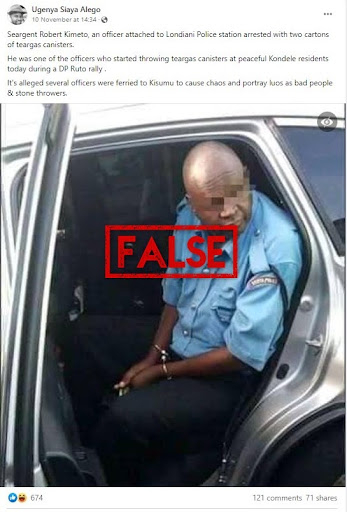 However, a reverse image search shows that the image of the handcuffed officer is at least two years old.

The image was published in a 2019 report about a series of arrests targeting policemen in Kisumu, just a day after the Ethics and Anti-Corruption Commission (EACC) ranked Kenya’s police as one of the country’s most corrupt institutions.

Local media did not name the officers, however, this video report reveals that they were released on bail.

Kenya's deputy president William Ruto’s motorcade was stoned on November 10, 2021, in the Nyanza region where he was holding political rallies.

Other pictures, also unrelated to the event, circulated online with false claims that the images showed  the chaotic scenes. AFP Fact Check debunked them here.

Meanwhile, a Kisumu county employee identified as Wilson Aminda was arrested in connection with the violence, according to reports here, here and here – but he was not a police officer as claimed in the posts.

By the time of press, AFP Fact Check was unable to establish the identity of the police officer falsely identified as Seargent Robert Kimeto.