Facebook posts with photos claiming to show violent scenes from last week’s political rally held by Kenya’s deputy president William Ruto are circulating online in Kenya. But the images are shared in a misleading context. Although Ruto’s recent visit to Kenya’s Nyanza region was met with anger, at least two of the photos are old and unrelated to his presidential campaign.

On November 10, 2021, this Facebook page, which has shared content in support of Ruto’s election bid, posted a collection of images alongside a claim that these were scenes from Ruto’s political rally. At a political rally last week, Ruto, who is eying the presidency in elections next August, was confronted by a rowdy crowd in Nyanza. According to local reports, the mob hurled stones at his motorcade, forcing him to cut his speech short.

However, a reverse image search showed that two of the images are several years old.

The first image of a charged-up crowd standing on a barricaded road is an AFP photo that was taken in 2008 following the killing of an opposition lawmaker. The incident occurred near the end of Kenya’s explosive 2007/2008 post-election violence. Another reverse image search revealed that the picture of a man wearing a yellow hardhat with rocks in his hands has been online since June 13, 2020. The image shows opposition politician, Joachim Okech, protesting against the burial of a popular musician known as Abenny Jachinga in Nyanza.

According to reports here and here, locals opposed the hastiness of Jachinga’s burial, which the police had enforced due to Covid-19 regulations.

The other five images shared in the Facebook post show the same damaged vehicle from different angles. Local reporters covering the rally confirmed to AFP Fact Check that the photos were from the Ruto event and correspond to other pictures of the same vehicle taken by a journalist. A comparison of the Facebook images (L) and images taken by a journalist covering the political rally, taken on November 17, 2021

Separately, an aerial picture of a large crowd was also shared in Facebook posts (here and here) alongside a claim that it shows the same Ruto gathering.

“This is Homa Bay. Hustler Nation. Raila Ojinga (Odinga) is worried (sic),” reads one of the Facebook posts, suggesting that Ruto is becoming more popular in an area where Odinga enjoys large support. 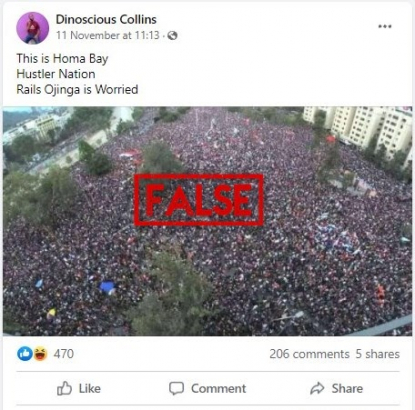 However, a reverse image search showed that this image was taken during Chile’s 2019 protests over inequality and the rising cost of living (see here and here).

As Kenya prepares for general elections in August 2022, online users have shared altered images and unrelated pictures of crowds to boost the popularity of favoured politicians.