Skip to main content
A man fish with a fishund rod in front of the US Navy Ship USS Mount Whitney, docked off the port of Sarayburnu, in Istanbul, on November 3, 2021. ( AFP / Ozan KOSE)

Multiple Facebook posts have shared a purported news report claiming the US Navy "raided a cargo ship off the coast of California and rescued 200 foreign children". Social media users thought the incident was genuine. But the claim originated on a satirical website. "There is no truth to these claims", a Navy spokesperson told AFP.

"Navy SEALs on Tuesday launched a predawn raid on one of the hundreds of cargo vessels, a Hong Kong-flagged bulk carrier called the Morning Star, anchored off Long Beach, California, and rescued 200 foreign children who had been imprisoned in a decrepit cargo hold, said a military adjunct under promise of anonymity." 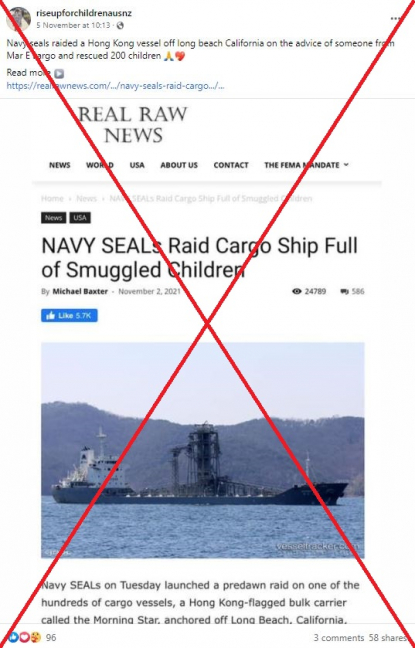 The same claim was also shared on Facebook here, here and here.

Comments to these posts indicate social media users were misled.

Another comment states: "I would say this is happening all over the place."

The US Navy and the Long Beach port authority separately confirmed to AFP the events described in the posts never happened.

"There is no truth to these claims", a US Navy spokesperson told AFP on November 11.

The Long Beach port had no information on the purported operation, a spokesperson said on November 16.

AFP has previously debunked misleading posts that have passed off stories from Real Raw News as genuine here, here and here.