Skip to main content
The first boxes of the Johnson & Johnson Covid-19 vaccine are ceremoniously transported to shipping at the McKesson Facility in Shepherdsville, Kentucky on March 1, 2021 ( POOL / AFP / Timothy D. Easley)

An online article says US Census data and CDC vaccination numbers were compared by a Kentucky county health department to determine the vaccination status of its residents. This is false; the Census Bureau and the CDC deny sharing any data with local officials that would lead to singling out the vaccinated from the unvaccinated, noting that to do so would break the law.

"Census Data, CDC Database Expose Unvaccinated," says the headline of an online article published on September 17, 2021 on Real Raw News, a website that has been flagged by AFP Fact Check in the past for sharing false information. 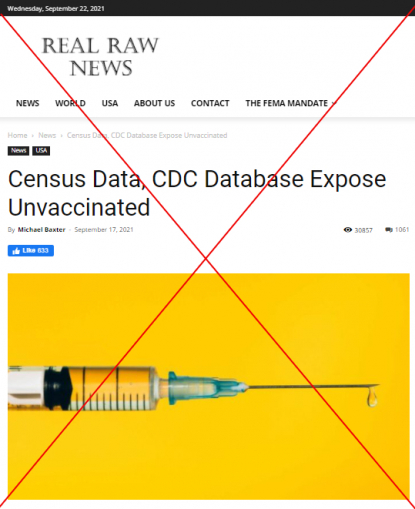 A screenshot of the Real Raw News article headline taken on September 22, 2021

The article claims that a representative of the Elliot County health department in Kentucky visited the house of "Mr. Oliver," a resident of the city of Sandy Hook.

The official then supposedly told the resident that the health department knew three members of his household were unvaccinated against Covid-19 -- a conclusion that the article claims was reached after comparing the Centers for Disease Control and Prevention (CDC) numbers on vaccination and Census Bureau data.

Another website later picked up the story here, while social media posts shared it here, here and here.

However, both the CDC and the Census Bureau told AFP the claim was false.

Real Raw News says on its "About Us" page that its website "contains humor, parody, and satire," but it fails to mention the nature of the article that shares the Elliot County resident's testimony. Comments posted under the story also appear to show readers took it seriously.

According to the US Census Bureau, "the law prevents the Census Bureau from sharing your information with any local, state, or federal health officials." Census answers "cannot be used against you by any government agency in any way."

The Census Bureau is bound by Title 13 of the US Code to provide strong protection for the information it collects from individuals and businesses. Employees are also sworn to protect confidentiality.

Despite a century of medical advances, more Americans have died from Covid-19 than the number who succumbed to the 1918 flu pandemic, according to Johns Hopkins Medicine data.

The latest numbers coincide with a fourth wave of infections driven by the highly contagious Delta variant, with low vaccination uptake in many regions seen as the main cause of death.