Social media posts shared tens of thousands of times show an image of world leaders waving as they pose for a photo, while Thai Prime Minister Prayut Chan-O-Cha fails to raise his hand. The posts mock Prayut and accuse him of failing to understand the photographer's instructions. The claim is misleading; the picture has been cropped to cut out other leaders who also did not wave.

"A journalist shouted in English: 'Raise your right hand at the same time.' Everybody was doing it except him...LOL," reads a tweet in part, posted on November 12 and retweeted more than 20,000 times.

The tweet features a buffalo emoji, which in Thailand refers to a stupid person. 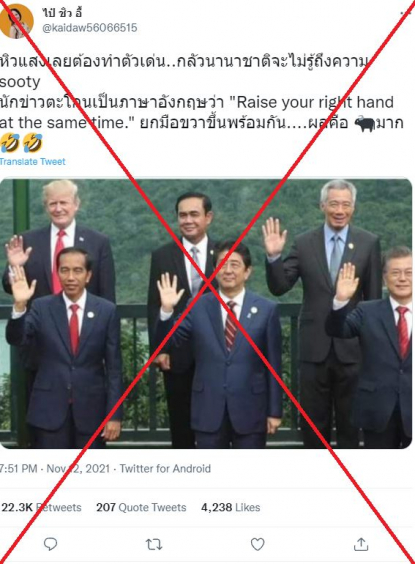 All the leaders in the photo except Prayut are seen raising their hands.

A reverse image search on Google and keyword searches found the original photo -- from which the picture circulating online has been cropped -- published on November 11, 2017 by South Korean news agency Yonhap.

The Korean-language photo caption reads: "President Moon Jae-in and other heads of state attending the APEC Summit pose for a commemorative photo at the APEC Summit held at the InterContinental Hotel in Da Nang, Vietnam on the morning of the 11th (local time).

In the original, uncropped photo, Prayut is not the only leader who fails to raise his hand.

A wider crop of the photo showing Prayut along with Trudeau, Putin and Ardern (circled by AFP) not raising their hands

A keyword search found footage of the leaders gathering for the photo shoot.

At the 2:39 minute mark of the video, world leaders begin to wave their right hands.

As the camera pans out, Prayut can also be seen waving his hand.

The photo which appears in the misleading post corresponds with the 2:50 mark of the video, by which time some leaders had lowered their hands.

Prayut is regularly a target of misinformation. AFP has previously debunked false claims shared about him here, here and here.