Two photos have been shared thousands of times in multiple Facebook posts that claim they show Thai schoolchildren flashing a three-finger salute of resistance to Thai Prime Minister Prayut Chan-O-Cha. The claim is false. The photos show Prayut and the students at separate events. A spokesman for the school cited in the misleading posts said Prayut had never visited.

"Shocking, Prayut Chan-O-Cha went to Satit Kaset to deliver a speech about Thai law, rules and manners. But the students there raised him a three-fingered salute and said this is our future," reads a Thai-language Facebook post published on October 10.

Satit Kaset is a public school in the Thai capital Bangkok.

The post -- which has been shared more than 400 times -- included a photo of Prayut and another photo of children raising their hands in a three-finger salute.

The salute has become popular at anti-government protests across Thailand that first gained momentum in July 2020. 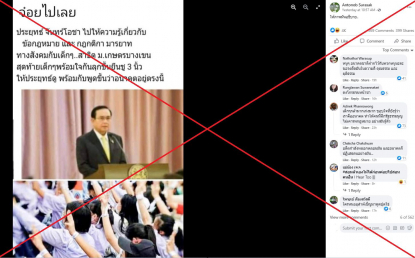 The same photo collage was shared here, here and here on Facebook alongside a similar claim.

A reverse image search on Google found the photo of Prayut was originally published here on the official website of Buengkan province in northeast Thailand on April 2, 2020.

The report was published three months before major anti-government protests erupted in Thailand.

The report's headline reads: "To prevent Covid-19, a nationwide curfew has been implemented. You can't leave your house from 10 PM-4 AM starting April 3".

The report reads in part: "As the director of the Center for Covid-19 Situation Administration (CCSA), he has signed the terms and conditions under Article 9 of the Emergency Decree during Emergency Situations as of 2005. The state of emergency has been declared in the Kingdom".

The photo appears to have been used for illustration purposes.

AFP found footage of Prayut announcing the nationwide curfew on April 2, 2020 actually shows him without his glasses and wearing a different tie.

Below is a screenshot comparison of the image in the misleading posts (L) and the photo published in 2020 (R):

Screenshot comparison of the doctored image in the misleading posts (L) and the original photo (R):

A reverse image search on Google found the photo of children making a three-finger salute was posted in a tweet on September 19, 2021.

The post is about the "Bad Student" movement in Thailand -- a group of high-school students who called for the reform of the Thai education system.

The Thai-language tweet reads: "Somebody said that red shirts gave birth to real democracy. This is true. The kid in the photo is my daughter. During the 2006 coup, I carried her in my belly to protest against the military junta. 15 years later, she participated in the Bad Student movement, raising a three-fingered salute to kick out Prayut's government".

The children in the photo are wearing white ribbons -- a symbolic prop used during the Bad Student protests -- on their wrists.

Below is a screenshot comparison of the image in the misleading posts (L) and the photo tweeted in September 2021 (R):

A spokesman for Satit Kaset school said the Thai prime minister had not given a speech there or paid a visit.

"PM Prayut has never visited our school," Narongchan Panman, the school's head of public relations told AFP. "Given the Covid-19 pandemic, it is very difficult to gather our students together, let alone at an event like this. Our students have been studying online most of the time.

"Also, the school uniforms that appeared in the image are not identical to ours," he said.

There are no credible reports that Prayut delivered a speech at the school named in the misleading posts.