Online articles and social media posts claim a "rabbinical court" that is part of Israel's legal system ruled against Covid-19 vaccination for young people and children in a binding decision for observant Jews. But leading rabbinical authorities in both Israel and the United States have endorsed vaccination, and experts say the ruling did not come from a widely recognized Jewish legal authority.

"The Rabbinical Court is part of the Israeli legal system and determines laws that reflect the teachings of the Torah. A ruling by the Rabbinical courts is considered God's law and is strictly followed by the Jewish community," the text of the article says. 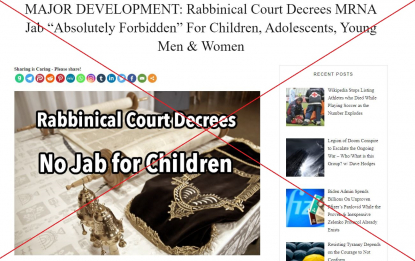 Screenshot taken on November 12, 2021 of an online article

Similar claims -- part of a flood of inaccurate information about vaccines spreading online as countries around the world seek to vaccinate their populations against Covid-19 -- appeared in this article and on Twitter here and here.

Israel was one of the first countries to launch a Covid-19 vaccination campaign, and has authorized the shots for children aged five to 11. The document cited in the article had three signatories not affiliated with any widely recognized Jewish institution or the Israel-based Rabbinical Courts.

Israel's Chief Rabbinate declared in March 2020 that Jews should heed the guidelines of government health officials to prevent the spread of Covid-19, saying that the "coronavirus can also pass from a completely healthy person to another person and endanger another and therefore this requires absolute adherence to instructions given even if they are harsh and burdensome."

In June 2021, two senior ultra-Orthodox rabbis in Israel called for vaccination of all individuals aged 12 and up. Leading rabbis in Israel were vaccinated themselves in public settings in December 2020 while urging their followers to do the same.

In the United States, the director of Beth Din of America -- which convenes rabbinical courts dealing with family law matters -- said it had no connection with the entity that issued the ruling opposing vaccination.

"I can confirm that this is not the work of the Beth Din of America," Rabbi Shlomo Weissmann, director of the New York-based organization, told AFP.

"Also, I am not familiar with any of the three individuals who signed this. The Beth Din of America is affiliated with the Orthodox Union and Rabbinical Council of America, which published this document several months ago, and which is representative of the mainstream Orthodox Jewish approach to vaccination and to the Covid vaccine," he said.

It says: "Pursuant to the advice of your personal health care provider, the Torah obligation to preserve our lives and the lives of others requires us to vaccinate for Covid-19 as soon as a vaccine becomes available."

"But when the term 'rabbinical court' is used to connote a body that has the authority to rule on a matter of communal importance, the court really derives its authority by widespread communal acceptance," Weissmann said.

"If an actual rabbinical court (which meets regularly and is organized under the auspices of a sizable community) were to issue a proclamation, that might be newsworthy and it might even possess some degree of authority under Jewish law, depending on the circumstances. But when three unknown individuals sign a document, purportedly as a 'rabbinical court,' the term 'rabbinical court' becomes somewhat meaningless," he added.

Rabbi Michael Broyde, a professor of law and affiliate of the Center for the Study of Law and Religion at Emory University, agreed that the purported ruling had no significance under Jewish law.

The decision "is not the view of Jewish law," Broyde said.

"The overwhelming majority of Jewish law authorities have ruled that vaccines are permitted and even mandated according to Jewish law when they are medically recognized and recommended. Jewish law encourages such vaccinations and supports every person following the best medical advice available to them including being vaccinated."

Rabbi Shlomo Alexander Pollak, one of the three signatories of the ruling, defended it and said the hearing included "many rabbis from diverse Jewish communities," and that "public notice was sent out" for any rabbinic authority to participate.

"Those in attendance agreed upon this ruling; however many did not sign due to interference with their political standpoint of their community," he said, adding that three signatories is the minimum to issue a ruling.