No, fentanyl-laced blue tape is not being placed on your car to kill you

A widely shared online hoax, which originated in the US and spread to South Africa, claims that blue tape laced with fentanyl is being stuck on fuel covers in an attempt to drug or kill motorists. But experts told AFP Fact Check the drug cannot cause harm in the unlikely event that it’s absorbed through the skin. South African police also said they had never encountered such a case.

The Facebook post was published on October 23, 2021, from a South African account and includes a photo of a sedan with a piece of blue tape on the fuel tank cover.

“WARNING: If you find a tape like this on your car, do not take it off with your bare hands. The tape is laced with fentanyl and will kill you. December is here and people are doing crazy things (sic),” reads the post’s caption. 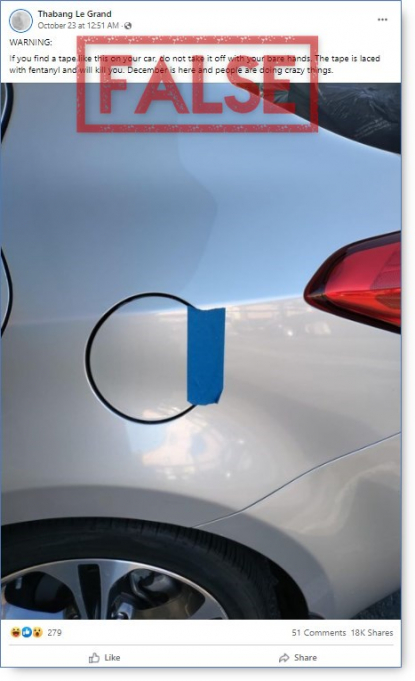 Fentanyl is a pain medication up to 100 times stronger than morphine. Some dealers mix it with other drugs including heroin and cocaine to increase the potency without warning users, according to the World Health Organization.

But despite its strength, experts said the drug cannot cause harm or death in the unlikely event that it’s absorbed through the skin.

“I have never heard of such and I don’t recall any cases being opened with us,” said police spokesman Vish Naidoo.

A reverse image search of the picture in the false post led to a debunk by US fact-checking website Snopes.

It revealed that the blue-tape claim was first published by California- based Facebook user Mark Alva on September 5, 2021. It has been shared more than 355,000 times since then. 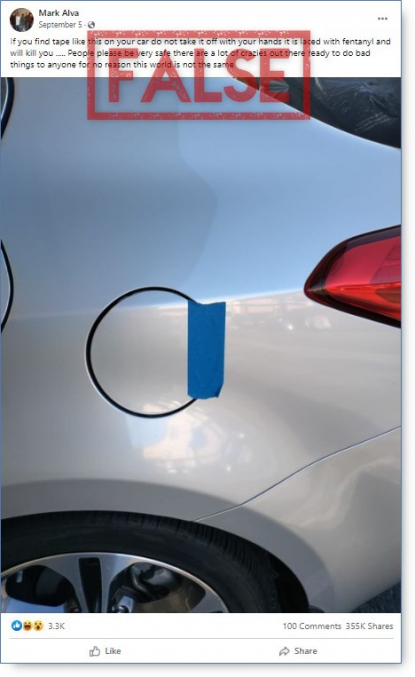 But another Facebook user called Unique Alva pointed out in the comments section that a car wash had put the tape on the fuel cover so that it would not open while it was being cleaned. She posted a picture of her own car with a piece of blue tape on the fuel latch.

Her comments indicated that she was the niece of the man who published the picture.

“Uncle Marky its from the car wash lol. Stela just told me you guys got a car wash too at the same place it's not fentanyl they put this so your gas tank won't open up... I got my car wash this morning (sic),” read her comment. 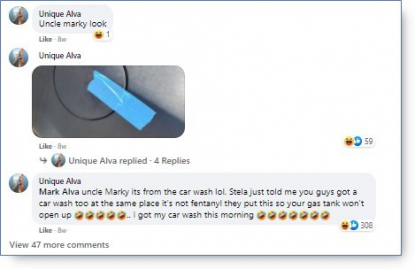 A screenshot of comments by Mark Alva’s relative, taken on November 11, 2021

Unique Alva said the car wash using the blue tape was in Menifee, California and a chat screenshot included in her post suggests it’s located over the road from a business called Stater Bros. Market.

However, Mark Alva dismissed the suggestion by Unique Alva that he had been to the same car wash and continued to insist that the tape was laced with fentanyl.

AFP Fact Check has contacted Unique Alva and Mark Alva for comment and will update this debunk in case of a reply.

We searched for car washes close to Stater Bros. Market in Menifee and found Andy’s Xpress Wash on Google Maps. 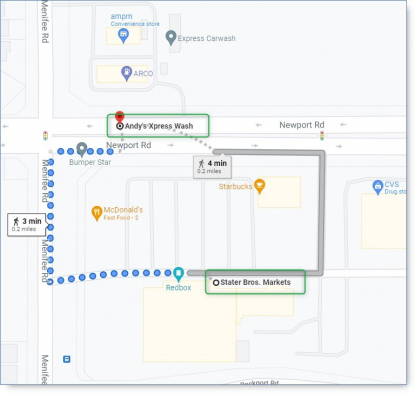 A screenshot of the car wash on Google Maps, taken on November 10, 2021

“Yes, we do use blue painters tape to tape down the more delicate parts of a car (such as the fuel tank door and wiper blades) to prevent damage to those parts within the automated machinery of the carwash itself,” the company told AFP Fact Check via Facebook Messenger.