A post on Facebook shared more than a hundred times claims to show Oromo Liberation Army forces in the back of a military truck heading for Ethiopia’s capital city Addis Ababa as a year-long conflict in the country rages on. However, the claim is false; the image in the post was digitally altered and actually shows government soldiers heading to Abi Adi, in northern Ethiopia, in May 2021.

The Facebook post was published on November 2, 2021, and includes an image of armed soldiers in the back of a military truck purportedly belonging to Ethiopia’s Oromo Liberation Army (OLA).

Written in Oromo, the caption translates to: “Oromo Liberation Army is marching to Finfinnee [Addis Ababa] by using Ural [a military truck] after the commander Jaal Marroo ordered the army to capture Finfinnee”. 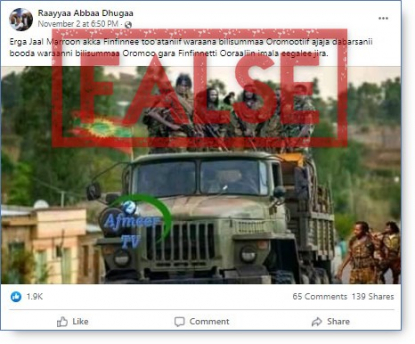 As reported by AFP, Jaal, commander of the OLA, warned Prime Minister Abiy Ahmed on November 7 2021, that pro-government fighters were defecting and that the rebels were close to victory.

"What I am sure (of) is that it is going to end very soon," Jaal, whose real name is Kumsa Diriba, told AFP.

The OLA and its allies, the Tigray People's Liberation Front (TPLF), have claimed several victories in recent weeks, taking towns some 400 kilometres (250 miles) from the capital, and have not ruled out marching on Addis Ababa.

Jaal told AFP that his fighters were some 40 kilometres (25 miles) from the capital -- and had "never moved (back) an inch" from territory they controlled.

AFP could not independently confirm this claim as much of the conflict-affected zone is under a communications blackout and access for journalists is restricted.

The government has rejected suggestions the rebels are within striking distance of Addis Ababa, but has ordered the capital to prepare to defend itself, while foreign embassies have withdrawn staff. 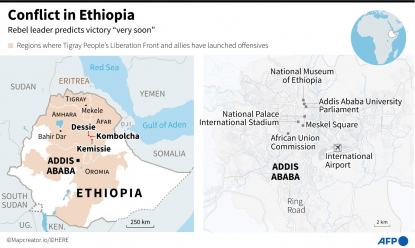 War broke out in Ethiopia in November 2020 when Abiy – winner of the 2019 Nobel Peace Prize – sent troops into Tigray to topple the Tigray People’s Liberation Front (TPLF) leadership in the Amhara region in response, he said, to attacks by the rebels on army camps.

A reverse image search found that the original photograph, which was taken by Ben Curtis for Associated Press (AP) on May 11, 2021, had been altered to include more soldiers and the OLA flag, giving the impression the troops in the truck were Oromo.

The original caption by AP reads: “Ethiopian government soldiers ride in the back of a truck on a road leading to Abi Adi, in the Tigray region of northern Ethiopia.” 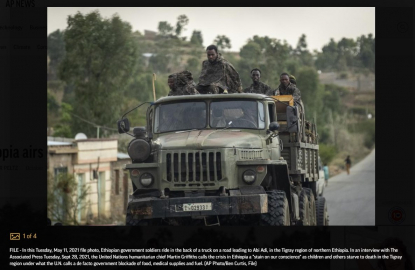 The original photograph by the Associated Press’s Ben Curtis, taken on May 11, 2021