Skip to main content
Anti-Marcos activists shout slogans at a protest at the People Power monument against the burial of the late dictator Ferdinand Marcos at the Heroes' Cemetery, in Manila on November 30, 2016 ( AFP / TED ALJIBE)

Facebook posts shared thousands of times purport to show a new Philippine banknote featuring the image of late dictator Ferdinand Marcos. However, the image -- which many social media users appeared to believe showed a genuine banknote -- comes from a satirical Facebook page. The Philippine central bank said on November 9 it had not issued a new banknote design.

The image was shared more than 1,700 times after it was posted on Facebook on November 5.

It shows a 500 Philippine peso ($10) banknote with a portrait of late dictator Ferdinand Marcos.

The Facebook post reads: "The Bangko Sentral ng Pilipinas or BSP launched the design of a P500 banknote and commemorative medal wherein it bears the face of the former President Ferdinand Edralin Marcos." 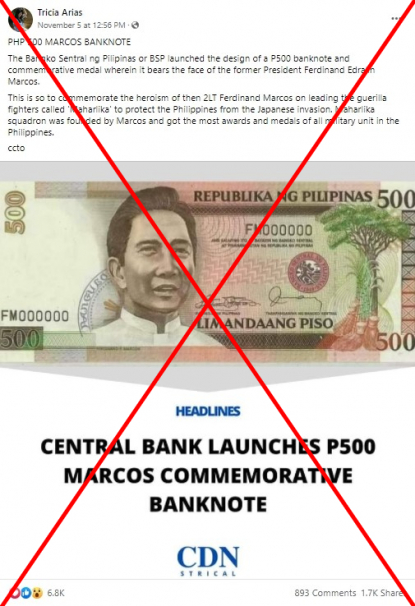 Ferdinand Marcos remains one of the most polarising politicians in the Philippines, accused of bloody repression and corruption.

The late dictator's son Ferdinand "Bongbong" Marcos Jr -- who announced he would run in the presidential election in 2022 -- has tried to defend his father's rule by citing economic growth, and minimised the human rights abuses during his regime.

The image of the banknote was shared hundreds more times in similar Facebook posts here, here and here.

Some social media users appeared to believe the banknote was genuine.

"Finally, a real hero is now the face of the 500 peso bill," one commented.

"This should have been done a long time ago! Long live Marcos!" another wrote.

The current 500 Philippine peso banknote features the image of former president Corazon Aquino -- who replaced Marcos when he was deposed in 1986 -- and her husband, former senator Benigno Aquino Jr.

However, the image originated from a satirical Facebook page.

The "About" section of the Facebook page features a disclaimer, which states that the page was created "to ridicule or make fun out of everything we deem as satirical worthy".

Screenshot of Cebu Dairy News's About page, taken on November 11, 2021

"Cebu Dairy News" appears to parody the media organisation CDN Digital, although the page's disclaimer statest that it is "not in any way connected" to the group.

The Philippine central bank -- which maintains the sole legal authority to issue currency in the country -- said it did not issue the banknote shown in misleading posts.

"The Bangko Sentral ng Pilipinas (BSP) informs the public that it has not issued new banknote designs or a new design series," the bank said in a statement on November 9.

"The BSP issues this advisory in response to a 500-piso commemorative banknote first posted on a satirical news website being shared broadly on social media."

AFP has previously debunked false claims circulating ahead of the Philippine 2022 election here, here and here.