Skip to main content
Philippine Vice President Leni Robredo gestures to a crowd of people supporting her candidacy to join the 2022 presidential race outside the Cultural Center of the Philippines in Pasay, Metro Manila on October 7, 2021. ( AFP / JAM STA ROSA)

Leni Robredo targeted by fake picture of politicians 'mocking' her

After Philippine Vice President Leni Robredo announced she would run for the top job in the 2022 presidential election, Facebook posts shared a photo of politicians laughing as they appeared to watch her speaking live on television. However, the picture has been doctored; the original photo shows politicians having dinner with with no television visible.

The photo, which was shared in a Facebook post on October 25, appears to show politicians laughing over dinner, including former senator Ferdinand "Bongbong" Marcos Jr and the daughter of President Rodrigo Duterte and Davao City mayor Sara Dutere.

A television screen in the background appears to show a CNN live broadcast of Robredo speaking, with Tagalog-language text that reads, "I am the mother of the entire country".

"Lugaw" is a Tagalog word colloquially used to refer to someone as stupid. 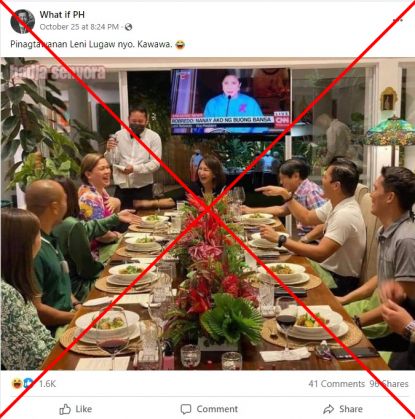 Robredo announced on October 7 she would stand in the 2022 presidential election. Her decision came days after her nemesis Ferdinand Marcos Jr, son and namesake of the country's former dictator, said he would also run for the top job.

Robredo and Marcos Jr were locked in a five-year poll fraud case after the former senator -- whom Robredo narrowly defeated for the nation's second-highest office in 2016 -- protested the results. The Philippine Supreme Court ruled that Marcos’s case lacked merit.

Sara Duterte, like her father, is a political ally of the Marcoses. In the Philippines, president and vice president are elected separately.

The photo was also shared here, here and here in similar Facebook posts.

"The reason why they're laughing is because someone on TV introduced herself as 'the mother of the entire country'", one person commented.

"They really found what Leni said very funny," another wrote.

However, the picture is doctored.

A reverse image search and keyword searches on Facebook led to the original photo uploaded on October 23 on the Facebook page of Sara Duterte's spokeswoman, Christina Garcia Frasco.

The image was posted in a set of photos captioned, "Thank you, Mayor Inday Sara Duterte, Sen. Bongbong Marcos and Governor Gwendolyn Garcia for accepting our invitation to come together for an evening of friendship, family and laughter".

The image did not feature Robredo on television in the background.

Below is a screenshot comparison of the altered image (left) and the photo from Frasco'ss page (right): 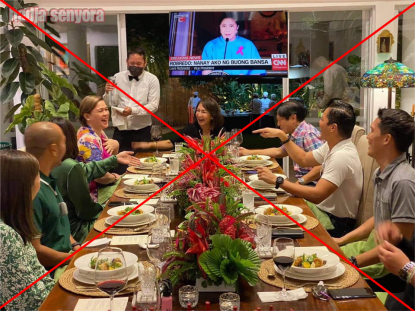 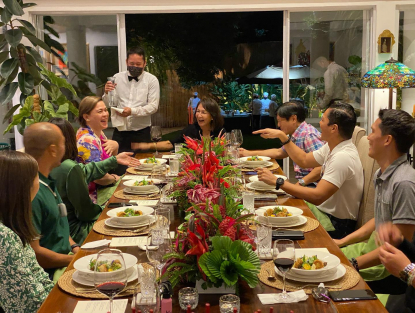 The photo was taken during Marcos's and Duterte's separate visits to political allies in Cebu province.

Additional keyword searches online show the image of Robredo's live appearance on CNN Philippines was recorded more than two weeks before the dinner photo was published.

The picture was taken from a live broadcast on October 7 by CNN Philippines, when the vice president announced her bid for the presidency.

The superimposed text “I am the mother of the whole country” can be seen from the video's 4:56 mark.