Skip to main content
A home is raised onto a newly constructed foundation to remove it from rising water levels on Hoopers Island, Maryland on August 9, 2021 ( AFP / Jim Watson)

Map does not show projected impact of climate change on US

Social media posts claim an image of a map shows what scientists anticipate the United States will look like in 30 years if climate change is not reversed. This is false; the image was created by an architect in 2015 who placed a map of the Mediterranean over one of the United States, and it is unrelated to the climate crisis.

"Scientists say this map represents the US in 30 years if we don't reverse climate change," says an October 26, 2021 tweet that has been liked more than 24,000 times. 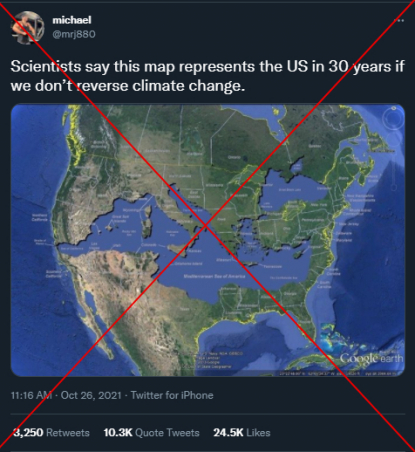 The same map was also shared on Facebook here.

The claim circulated online ahead of the COP26 summit in Glasgow, seen as a last chance to halt catastrophic climate change. Twenty countries including the United States pledged during the summit to end direct financing for overseas fossil fuel projects by 2022.

But the map has nothing to do with climate change projections. A Google reverse image search helped AFP identify the source of the image.

It was published on an architect's Tumblr in December 2015. Bret Drager, the author of the post, told AFP on November 3, 2021 that he made the map.

He wrote in the Tumblr post that "I tend to have a yearning for cartography. It may stem from my background as an architect, an artistic, technical and graphically based profession."

"I was examining maps and globes and realized that the Mediterranean Sea is at the same latitude as the United States. If only it were possible to rotate the Mediterranean Sea around to our side of the planet? Would it fit? What effect would this have? What about the states… new coastlines in the middle of the country… new relationships… states torn in pieces?" he wrote.

"A couple of screen captures, lots of graphic manipulation and now we know. The Mediterranean Sea fits within the confines of the United States of America."

Drager is not a climate scientist, nor does he mention environmental issues anywhere in his post.

Rising sea levels are, however, a major threat posed by climate change, as shown in the graphic below. 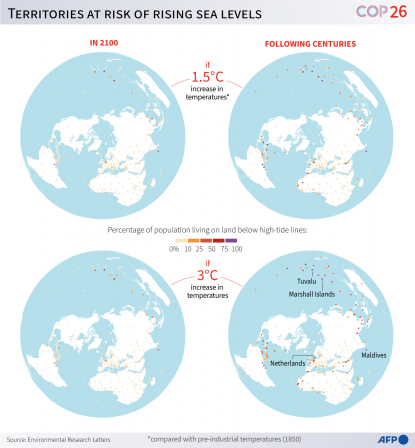 The percentage of people living in zones that could be underwater due to rising sea levels ( AFP Graphics / Simon Malfatto, Sabrina Blanchard)

Costal cities are at risk for devastation, particularly in Asia.

The Intergovernmental Panel on Climate Change (IPCC) warned in a report in 2021 that the Earth's average temperature will be 1.5 degrees Celcius higher around 2030, a decade earlier than projected only three years ago.

According to the IPCC's report, there is high confidence that human-induced global warming is responsible for higher land and ocean temperatures, and higher extreme temperatures in many regions.

"It is unequivocal that human influence has warmed the atmosphere, ocean and land," it says.

Many changes due to greenhouse gas emissions are irreversible for centuries to millennia, including global sea level rise, the IPCC report says.

AFP Fact Check has reported on five myths about climate change, and has debunked other inaccurate claims on the topic here, here and here.