Skip to main content
People walk along a bridge near a thermoelectric power station in Moscow on March 5, 2021 ( AFP / Yuri Kadbobnov)

Facebook posts downplay humanity's contribution to global warming by saying man-made CO2 makes up a tiny fraction of greenhouse gases in the atmosphere compared to water vapor. But experts say CO2 emissions are a significant factor in climate change, and focusing on water vapor is a long-standing tactic among those who want to minimize the major role humans are playing.

"SCIENTIFIC FACT: Man-made CO2 constitutes only 0.1 to 0.2% of atmospheric greenhouse gases. It is an insignificant contributor to global temperature and climate," says text in an image featured in a September 19, 2021 Facebook post. 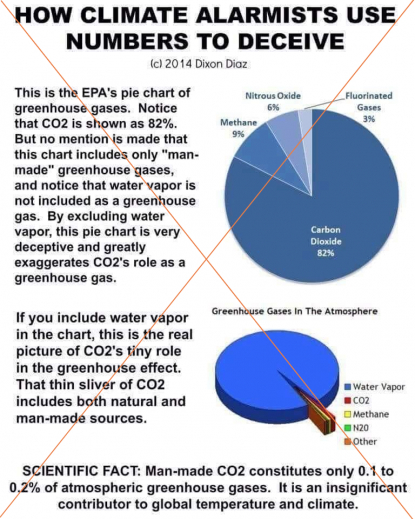 Posts that include the image -- which is titled "HOW CLIMATE ALARMISTS USE NUMBERS TO DECEIVE" -- also spread on Facebook here, here and here. They are part of a series of inaccurate claims about climate change that have circulated online for years.

The image compares two pie charts, one from the US Environmental Protection Agency that gives a breakdown of greenhouse gas emissions and another showing the amount of such gases in the atmosphere, criticizing the former as deceptive.

"CO2 is a very significant contributor to global temperature and climate change," NASA senior advisor on climate and head of the Goddard Institute for Space Studies in New York, Gavin Schmidt, told AFP.

"The EPA is not being misleading in producing a chart of US emissions of greenhouse gases (GHGs)," Schmidt said, adding that it is "misleading to compare GHGs by mass because that's not the important thing when tracking how they contribute to the greenhouse effect."

Marilyn Raphael, geography professor and director of the University of California's Institute of the Environment and Sustainability, emphasized that people are playing a major role in global warming.

"If we did not have the human-generated greenhouse gas concentration, our global average temperatures would not be increasing in the way that they have been for the last few decades," Raphael said.

"Although the concentration of carbon dioxide in the atmosphere is small by comparison with water vapor, a relatively small change in CO2 concentration has a significantly large effect on our temperature" because "atmospheric carbon dioxide absorbs the energy (heat) that the earth emits and re-radiates it back to earth," she said.

It is scientifically recognized that water vapor is the most abundant greenhouse gas in the atmosphere. But that does not mean CO2 plays a limited role in global warming.

Massachusetts Institute of Technology (MIT) professor Susan Solomon, a leader in atmospheric science, said: "Carbon dioxide doesn't condense like water vapor and it is removed only very slowly from the atmosphere, so as we increase it, temperatures increase."

These increased temperatures lead to heightened water evaporation, which "amplifies the climate change from the carbon dioxide even more because water vapor is indeed a very effective greenhouse gas," Solomon said.

"But it's not the water vapor causing the change -- it is responding to and amplifying the change," she said, adding that the image in the Facebook posts "is a great example of the practice of trying to confuse the public with information that is true but totally irrelevant." 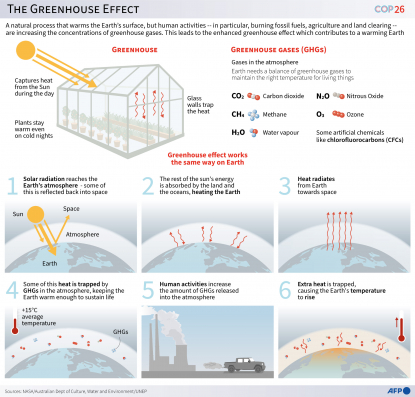 This claim about water vapor is not new.

Marshall Shepherd, director of the Atmospheric Sciences Program in the University of Georgia, described it as being a popular "zombie" climate theory. Scientists have long since rejected its validity, but the myth refuses to die.