Greek photographer, not a nurse, took the pigeon photo during a chance encounter in hospital

An old photo of a pigeon on a hospital bed has resurfaced online, with users claiming a nurse took the picture while the animal was visiting a patient who used to feed birds in a park. But the story is an urban legend. In reality, the image was taken by a photographer who spotted the animal during a chance encounter while visiting his father in a Greek hospital.

Facebook posts published here and here in October 2021 include the image of an elderly patient sleeping in a hospital bed with a pigeon perched on top of him.

“It's been 3 days since this patient arrived in hospital for treatment,” the captions read. “And in those 3 days no one in his family came to ask about his well-being (maybe also living alone). But a pigeon comes every day and sits in his bed for awhile and walks away (sic).”

The posts allege that the man used to feed pigeons daily in a park. 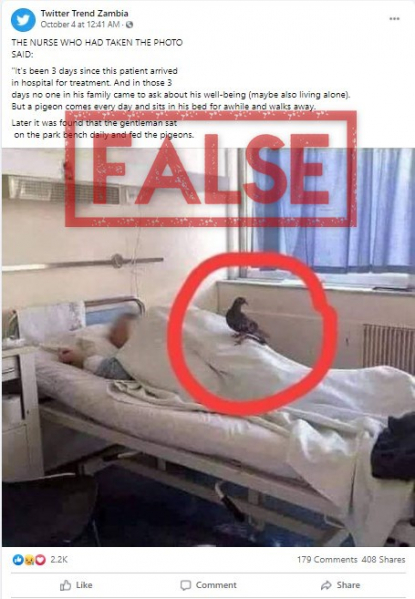 However, there is no mention of where the picture was taken, how the nurse identified the bird from the park or how the bird, for that matter, knew the man was in hospital.

Using reverse image searches, AFP Fact Check established the picture has been online since at least 2014 and the claims associated with it are false.

Photographer Ioannis Protonotarios (Ιωάννης Πρωτονοτάριος in Greek) told AFP Fact Check that he captured the moment in passing on his way to visit his father, who was in a nearby ward in the same cardiology unit of the Red Cross Hospital in Athens, Greece on October 19, 2013.

Protonotarios said the photo had “absolutely” nothing to do with the sympathetic nurse narrative it has become popularly attached to.

“I just took a picture of a bird that flew inside. I was just the right person at the right time. Nothing more. Nothing less,” he said.

Protonotarios added that knew nothing about the patient, except that he slept for the duration of the visit.

“He was asleep the whole time. I didn't stay much in the room, just a couple of hours before my father was moved to the ICU,” Protonotarios said.

“My father was just there on this particular day... The windows were open, a bird flew in, sat on the patient, end of story,” he said.

A screenshot of the original photograph, published on Flickr on October 19, 2013

“I was just lucky to take the picture.”

Protonotarios made his image available on Flickr under a creative commons licence.

“They [the pictures] have all metadata visible including geolocation so it's easy to find out when and where exactly it was taken,” he said.

The metadata correlates with his picture on Flickr, which specifies the make and model of the phone he used to get the shot – a Sony Ericsson LT26i – as seen in other pictures he posted to his account.

Additionally, in one comment eight years ago, Protonotarios thanked users for their comments about his pigeon photo and dedicated it to his father.

“Thank you all for your kind comments and favs! In loving memory of my father who used to occupy the bed next to this one untill just 5 days ago (sic),” it reads.

Protonotarios said he has dealt with the false claims for about a year, with enquiries every couple of months coming from journalists across the world, including India, the United States, and the Middle East.

“The picture has magic of its own. I don't understand why someone needs to invent a more sensational story,” Protonotarios said.

“It's like putting melodramatic music over it. The image is strong enough as it is. Hundreds of people have related to it without the need of a more sensational story.”