Multiple Facebook posts shared thousands of times purport to show the moments before South African anti-apartheid activist Solomon Mahlangu was hanged. While the quote attributed to Mahlangu in the post is correct, the image used to depict the event is unrelated and shows the 1934 execution of James Keaton at a Mississippi courthouse in the United States.

Facebook posts (here and here) shared hundreds of times since August 2021 include an image of a Black man with a noose around his neck, surrounded by a group of white men standing on what appears to be gallows.

“BEFORE HE WAS HANGED South Africa’s Solomon Kalushi Mahlangu said; ‘My blood will nourish the tree that will bear the fruits of freedom. Tell my people that I love them. They must continue the fight, Aluta Continua (sic)’,” reads one post’s caption. 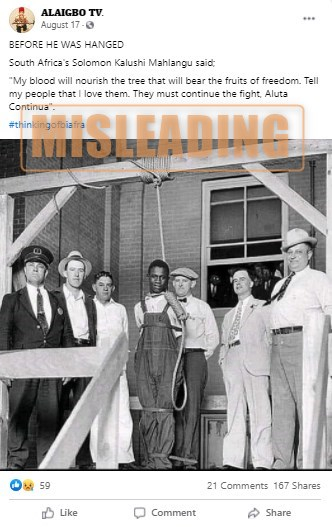 Another Facebook post shared more than 1,000 times added the following disclaimer: “Note: This is not the picture of Kalushi. It is just a picture we borrowed to portray his message.” 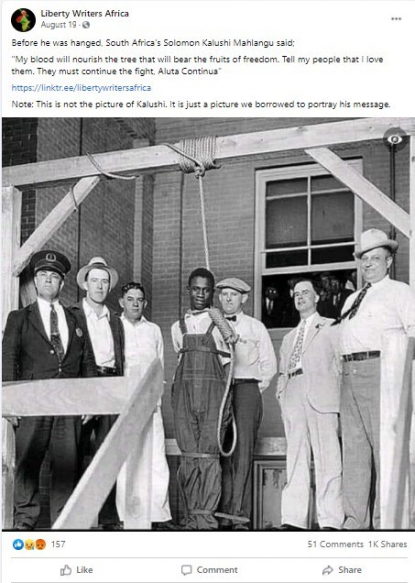 But subsequent posts, such as this one here from September 25, 2021, failed to indicate the image was for illustrative purposes.

Mahlangu fought against South Africa’s apartheid regime as a member of the ANC’s armed wing called Umkhonto we Sizwe. He was convicted of murder after he and two other operatives were intercepted by police, leading to an exchange of gunfire.

Despite not having fired a shot, Mahlangu was found guilty and sentenced to death on March 22, 1977.

The 23-year-old was hanged on April 6, 1979, at the Pretoria Central Prison despite two years of international pressure to have his sentence commuted.

Mahlangu’s final words were recorded (here and here) as: “My blood will nourish the tree that will bear the fruits of freedom. Tell my people that I love them. They must continue the fight.”

Reference to the quote can be found on his gravestone in Mamelodi, Pretoria.

AFP Fact Check used comments on the false Facebook posts and reverse image searches to trace the origin of the picture: It shows an American man names James Keaton, not Mahlangu.

There is little information online about James Keaton, who was convicted by an all-white and all-male jury in Columbus, Mississippi for killing service station owner Fred Hayslett during an altercation with a group of white men.

Keaton was sent to the gallows and his photograph was taken minutes before by photographer Otis Noel Pruitt on May 25, 1934.

A researcher's paper on Pruitt describes Keaton’s last moments: “In the photograph, a most telling detail is the look of Keaton, who at age twenty two, faces death in minutes. He looks straight into the camera. Before a black execution cowl had been pulled over his head, he said: ‘Goodbye, everybody'.”

The picture can also be seen in research and articles documenting executions in the United States, including here and here.

Although Mahlangu and Keaton were close in age, they were executed decades and oceans apart.