Footage of a huge protest has been viewed thousands of times on Facebook, Instagram and Twitter alongside a claim the demonstration forced the Romanian government to close all vaccination centres. The claim is false. The footage actually shows an anti-corruption rally in Romania in 2017. The Romanian government closed some of its Covid-19 vaccination centres in September 2021 — but hundreds remain open as of September 23, 2021, officials told AFP.

The video was posted on Facebook here on September 22, 2021. It has been viewed more than 300 times. 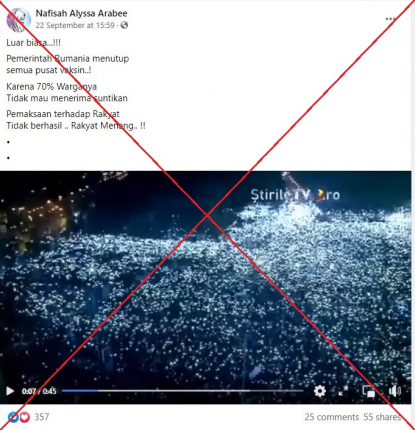 The same footage has been viewed more than 16,400 times after it appeared with a similar claim on Facebook here, here and here; on Instagram here; as well as on Twitter here and here.

The same footage was also shared alongside a similar claim in Serbian.

A reverse image search on Google found the original video of the protest was published on February 5, 2017.

It was uploaded on the official YouTube channel of Romanian public broadcaster TVR.

Hundreds of thousands of Romanians staged rallies for days against an emergency decree that would have decriminalised certain corruption offences in February 2017.

Even after the decree was scrapped, an estimated half a million people still gathered at Victory Square in Romania's capital Bucharest on February 5, 2017, calling on the government to resign.

AFP reported on the protest here.

Below is a screenshot comparison of the video in the misleading post (L) and the TVR footage (R):

When the misleading post was first shared, it was true that more than 70% of Romanians had not yet been vaccinated.

Romanian newspaper Adevarul reported on September 21, that 237 vaccination centres were temporarily closed due to low footfall.

However, 581 vaccination centres and 837 offices continued to offer Covid-19 vaccines as of September 23, an official from Romania's National Coordinating Committee for Activities on Vaccination against COVID-19 (CNCAV) told AFP.

Vaccination locations and the number of available vaccine doses can be seen here on the CNCAV's official website.

AFP previously debunked a misleading claim that all Covid-19 vaccination centres were set to be closed in Romania due to declining demand for vaccines.