Picture of a flooded classroom was taken in Kenya, not Zimbabwe

The image of a flooded classroom with students seated on blocks of concrete has been shared numerous times on Facebook alongside claims that it was taken in Zimbabwe. The claim is false; AFP Fact Check has previously looked into the same picture and found that it was taken in Kenya in 2019.

Facebook posts (here and here) published on September 5, 2021, include the picture of children seated in a rural classroom on top of concrete blocks, while their bare feet are mere inches from the muddy waters.

“A school in Binga - Zimbabwe,” one post’s caption reads. 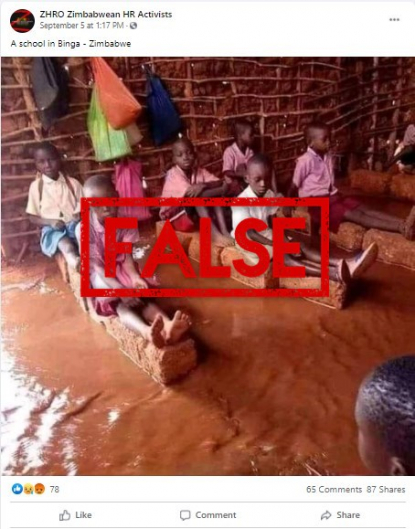 “This what zanu pf mp is doing in his district of uzumba marambapfungwe please guys #Register to Vote for better Zimbabwe /Bring back Zimbabwean $,” reads another post’s caption.

This post uses the image to encourage people to vote by claiming that the school is in poor condition because of the ruling party Zanu-PF.

Uzumba-Maramba-Pfungwe (UMP) is a rural district in Mashonaland East Province in Zimbabwe, which is reportedly a Zanu-PF stronghold.

Misinformation is growing steadily as the country gears up for elections in 2023.

However, the picture is neither from UMP nor Binga – nor is it even from Zimbabwe.

A reverse image search of the photo immediately leads to debunks from fact-checking organisations – including AFP Fact Check – refuting older claims that the picture was taken in Nigeria.

But it also finds Kenyan articles (here and here) from May 2019 on the dire learning conditions at Mangororo primary school in Ganze, Kilifi County after a downpour. 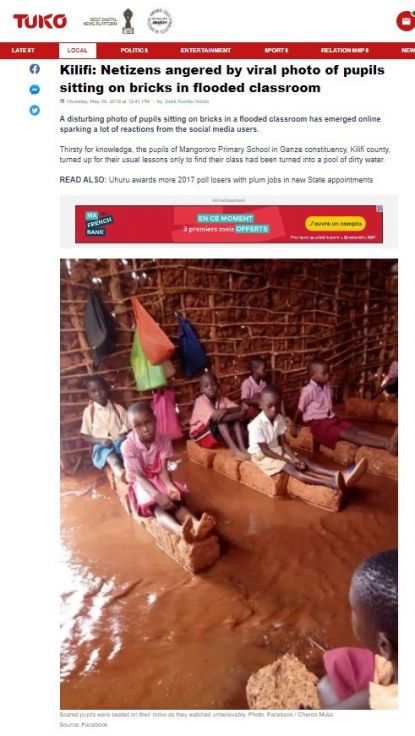 A screenshot of a TUKO article published on May 9, 2019

A video report by Kenyan broadcaster NTV showed the school’s poor condition, which a local politician blamed on inadequate funding from the education ministry.