Skip to main content
People walk past signage at a Covid-19 vaccination hub at the Brisbane Convention and Exhibition Centre in Brisbane on August 17, 2021. ( AFP / Patrick HAMILTON)

Social media posts in Australia have shared graphics that they claim show actual "Covid-19 vaccine deaths" and adverse events in the country. The posts claim the figures were released by the Therapeutic Goods Administration (TGA), the country's medical regulator. But these graphics -- which have caused alarm around Covid-19 jabs -- have misrepresented TGA figures. Similar fake graphics have been previously disowned by the TGA.

"From the TGA Australia!" reads the caption to this graphic posted on Instagram on August 31.

It compares these figures to a relatively low number of 75 "Covid-19 deaths" during the same period.

The graphic gives the source of the data as the TGA's Database of Adverse Event Notifications (DAEN). 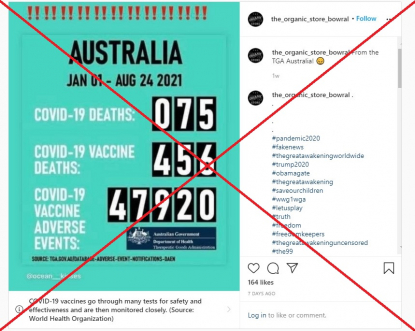 A screenshot of the misleading post as of September 8, 2021.

Australia's sluggish Covid-19 vaccine rollout has picked up in recent months, as more supplies reached the country, where rising case numbers and deaths have forced several major cities into lockdown.

Similar graphics were also shared on Facebook here and here, as well as on Instagram here, prompting a flurry of anti-vaccine comments.

"The so called vaccines have killed more people in the past 8 months than COVID has," one wrote.

"These so called 'vaccines' need to be recalled!" said another.

The TGA said the social media posts misrepresented its figures.

"Reports are published in the DAEN irrespective of whether the adverse event is assessed by the TGA to be related to the vaccination," the agency told AFP in a statement.

According to a TGA safety report, nine deaths were found to be "linked to immunisation" from 495 reported deaths up to August 29.

During the same period, the TGA recorded 55,016 adverse events following vaccination. The "overwhelming majority" of side effects were "mild", such as headache, muscle pain and fever, it said.

It is unclear where the figures in the misleading social media posts were taken from.

The graphics shared in the misleading posts are nearly identical to previous fake graphics here and here that were disowned by the TGA.

"The alleged posting particularly of the false information of the death counter from 'COVID-19 vaccines' with the Department's and TGA's apparent endorsement is particularly concerning," a TGA spokesperson previously told AFP.

Vaccine safety statistics have repeatedly been taken out of context on social media, fuelling panic and confusion around Covid-19 vaccines, which experts stress are safe.

AFP has previously debunked misleading posts about vaccine data from Australia, Britain and the United States.