Skip to main content
A flag-draped case is placed inside a vehicle at Dover Air Force Base in Delaware on August 29, 2021 ( AFP / Saul Loeb)

Biden attended arrival of US troops killed in Afghanistan

Online articles and social media posts claim US President Joe Biden was not present when service members killed in an attack in Afghanistan arrived in the United States. This is false; the Air Force and an AFP photographer say the president was in attendance.

"Caskets of Fallen Marines Arrive from Afghanistan; No One from Biden Administration Bothered to Greet Them," says the headline of an August 28, 2021 article on MediaTimesToday.com.

"Under Joe Biden, there doesn’t appear to be respect for our fallen heroes. The caskets of the fallen marines have arrived from Afghanistan. But... Biden himself wasn’t there. He didn’t even send someone in his place," the article says.

Screenshot of an online article taken on September 2, 2021

The claim about the 13 members of the US military killed in an August 26, 2021 suicide bombing in Kabul also appeared in articles here and here and social media posts here and here.

"The flag-draped transfer cases of the 13 fallen service members arrived to Dover AFB, Delaware, together in a C-17 shortly after 8 a.m. Aug. 29. President Biden as well as several Department of Defense senior officials were part of the official party for the dignified transfer," Christin Michaud, chief of public affairs for Air Force Mortuary Affairs Operations, told AFP.

AFP photographer Saul Loeb covered the ritual at the Air Force base and documented Biden's presence at the event. 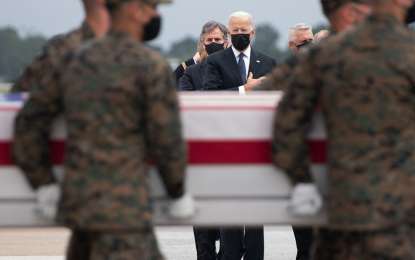 US President Joe Biden attends the dignified transfer of the remains of fallen service members at Dover Air Force Base in Dover, Delaware on August, 29, 2021 ( AFP / Saul Loeb) 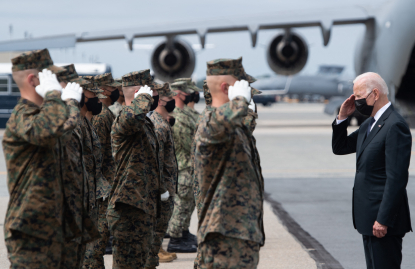 US President Joe Biden salutes members of the military at Dover Air Force Base in Delaware on August, 29, 2021 after attending a dignified transfer of the 13 troops killed in Afghanistan ( AFP / Saul Loeb)

Biden "met with the families of the fallen service members and then stood and watched with his hand over his heart as the flag draped transfer cases with the remains of the 13 service members were carried off a military C-17 airplane," Loeb said.

"Military leadership, senior government leaders, families of the fallen and members of the media, including myself, stood by witnessing the transfer, each passing just feet in front of the president," he added.

America's two-decade war in Afghanistan ended when a giant C-17 plane transport laden with troops and the US ambassador flew out of Kabul airport on August 30.

All articles
Afghanistan US POLITICS