An image has been shared on Facebook in Ethiopia purporting to show Alula Solomon, the US-based head of Tigrayan online media site Tigrai Media House, wearing a shirt in the colours of the Oromia and Tigray regional flags. However, the image was doctored and the original photo shows Alula wearing a jersey of the British football club Manchester United.

The image, archived here, was posted on Facebook on August 17, 2021, and has been shared more than 50 times since.

It shows Alula wearing a red shirt purportedly featuring both the Tigray and the Oromo regional flags. The Tigray regional flag with a yellow star is on the left, and on the right is the Oromo flag, with a green stripe and a green tree.

The claim surfaced after a group from the Oromia region calling itself the Oromo Liberation Army (OLA) announced an alliance with the Tigray rebels of the Tigray People’s Liberation Front (TPLF).

Both TPLF and OLF were designated as terrorist organisations in May 2021 by the federal government. Northern Ethiopia has been wracked by violence since November 2020, when Ethiopian troops entered Tigray to topple the TPLF. 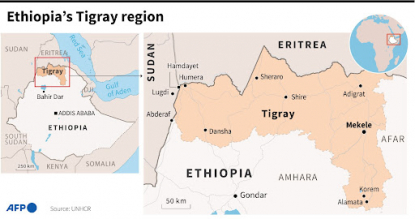 An OLA spokesman, Odaa Tarbi, told AFP in mid-August that the alliance between the two groups “is based on the mutual understanding that (Prime Minister Abiy Ahmed’s) dictatorship must be removed”.

“At this point, we share intel and coordinate strategy,” he added.

The image of Alula wearing the two regions’ flags, however, was doctored.

AFP Fact Check ran a reverse image search and found that the original photograph of Alula was shared on Facebook more than four years ago, on July 26, 2017.

In the photo, Alula is wearing a Manchester United supporters’ jersey.

“Game Day!! Manchester United v Barcelona”, reads the post, which was published on a page in Alula’s name.

Alula, who runs Tigrai Media House out of Washington, DC, is known to be a fervent supporter of the TPLF. In a televised debate on French TV channel France 24 in November 2020, he accused the Ethiopian government of carrying out a “genocide” against the people of Tigray. Ethiopian state-owned media classify him as an activist.