Photo of child's rescue was taken in Haiti after earthquake in 2010, not 2021

Posts shared on Facebook with a photo claim that a child was found unharmed under the rubble of a house after an earthquake in Haiti. The posts however do not stipulate a date -- leading some to believe the image may be from the most recent earthquake in August 2021. But this is misleading: the iconic photo was actually taken in 2010.

A Facebook post on August 21, 2021, includes the image of a child with a wide smile and outstretched arms being rescued by emergency personnel.

“This child was found under the ruins of the house that used to have three floors in Haiti after the Earthquake. Not even a single bruise was found on his body,” reads part of the misleading post. 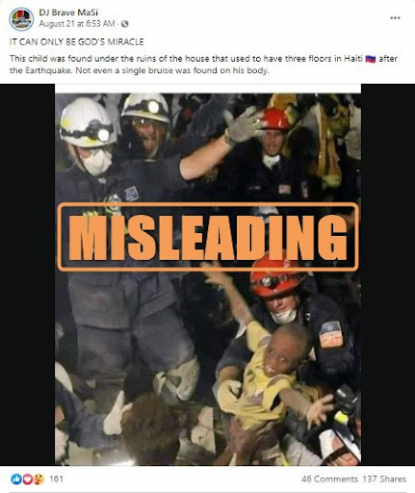 A massive earthquake on August 14, 2021 caused at least 2,200 deaths in Haiti and left thousands of people homeless, as AFP reported.

The 7.2-magnitude earthquake also injured at least 12,268 people and damaged or destroyed tens of thousands of buildings in the Caribbean nation, which has still not recovered from another devastating earthquake in 2010. 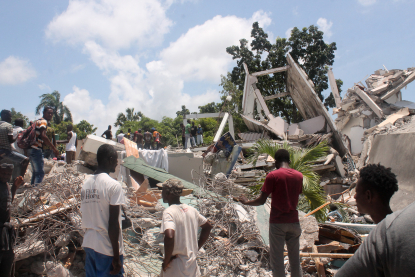 People search through the rubble of what used to be the Manguier Hotel after the earthquake hit on August 14, 2021, in Les Cayes, southwest Haiti ( AFP / STANLEY LOUIS)

The picture of the child's rescue in the misleading Facebook post is from 2010, not the recent disaster in Haiti.

A reverse image search of the photo using TinEye led to news articles from 2010 about a boy who was rescued along with his sister after more than a week buried under the ruins.

As reported (here and here), the photo captures the moment when seven-year-old Kiki Joachim was saved by rescuers. The iconic image was taken after a relative went back to their home a week after the wreckage and heard the children’s cries.

The photographer, Matthew McDermott, wrote about the experience for the New York Post on January 21, 2010, calling it the “most memorable shot” of his career.

“Kiki’s smile will live with me forever,” wrote McDermott.

In 2010, more than a million and a half Haitians were left homeless, leaving island authorities and the international humanitarian community with a colossal challenge in a country lacking either a land registry or building codes.