Multiple posts on social media claim that French football club Paris Saint-Germain sold 832,000 replica team jerseys in 24 hours after signing superstar Lionel Messi from Barcelona Football Club. This is false; the claim originated in 2014 in a tweet about the footballer, while PSG confirmed to AFP Fact Check that the claim is untrue.

“No player in history has sold more shirts in the first 24 hours of their transfer than Lionel Messi: 832,000+,” the caption reads. The post includes an image of Messi holding up his new number-30 shirt after his signing was confirmed by PSG. 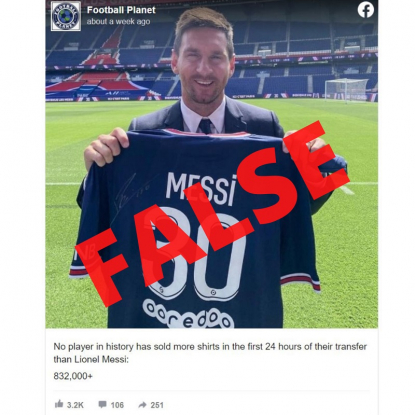 A screenshot taken on August 19, 2021, showing the false post

A respected sports journalist also shared the same claim on Twitter, where it has been retweeted 3,400 times since August 12, 2021.

Tears in Barcelona, smiles at PSG

Messi left Barcelona Football Club after two decades to join PSG in the second week of August. He will be reunited with former Barcelona teammate and Brazilian forward Neymar Junior.

Messi, who was in tears during his farewell speech in Spain, told a news conference in Paris that he was “extremely happy” to join PSG.

His move has led to a number of misleading and false claims, some of which AFP Fact Check has debunked here and here.

While investigating the claim by scouring through social media, AFP Fact Check found that the same details were in a tweet from 2014, when Messi was still at Barcelona.

The tweet, published on September 1, 2014, claimed PSG had signed Messi and the Argentine’s global status had helped the club sell 832,000 shirts. At the time, the tweet cited a purported story in Spanish sports newspaper Marca, although AFP Fact Check found no evidence on any such report. 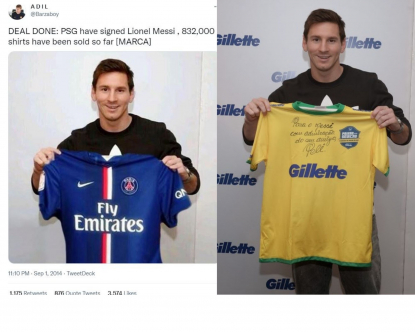 The tweet also included an image of Messi holding up what looked like a blue PSG club jersey.

However, a Yandex reverse image search showed that the picture was digitally altered. The original image has been on the internet since February 2014.

AFP Fact Check also found no record of Marca reporting any such story.

Contacted by AFP, PSG confirmed that the information was “false” and ”unrealistic”, stressing that the club had sold just over one million shirts for the entire 2019-20 season. The club refused to disclose shirt sales figures, but nevertheless said that it had recorded "the best start to a shirt sale in the club's history" with Messi’s arrival.

According to The Guardian, Forbes, Yahoo and Independent UK, Portuguese forward Cristiano Ronaldo’s move from Real Madrid to Juventus in July 2018 helped the Italian club sell 520,000 shirts in 24 hours. As AFP reported in 2017, PSG sold 10,000 Neymar Jr. shirts in a day.