Skip to main content
Japan's Mount Fuji is seen from Lake Yamanaka along with a Tokyo 2020 Olympics and Paralympics banner on July 19, 2021 ( AFP / Charly Triballeau)

Olympic athletes could take ADHD medication in Japan with exemption

Social media posts claim that Japan's restrictions on drugs used to treat attention deficit hyperactivity disorder (ADHD) prevented gymnast Simone Biles from taking necessary medication during the Olympics in Tokyo. But anti-doping agencies and Team USA say athletes could apply for an exemption to the restrictions.

"Ritalin and Adderall is 100% illegal in Japan under all circumstances including therapeutic use," said a July 28, 2021 Instagram post that linked the restrictions to Biles' withdrawal from several events in Tokyo competition, due to mental health issues. 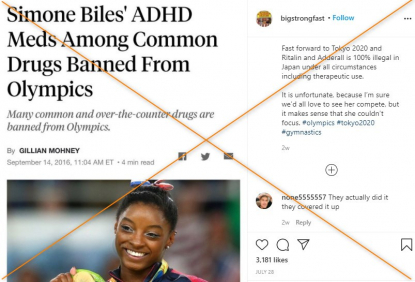 Although Japan has strict regulations on bringing stimulants into the country -- including drugs regularly used to treat ADHD -- Olympians could obtain an exemption.

"If an athlete needs to take one or the other compound, he/she will need a valid Therapeutic Use Exemption," she added.

Tadokoro Katsushi of the Japanese anti-doping agency confirmed that "in Japan, amphetamine is banned by law."

"Only athletes participating in the Tokyo 2020 Games with Therapeutic Use Exemption (TUE) under the World Anti-Doping Code, are allowed to bring Adderall (amphetamine) into Japan for their own medical treatment," he said.

A document on Team USA's website also indicated that it was possible to obtain an exemption.

"A special arrangement is in place specifically for the Tokyo 2020 Olympic and Paralympic Games to allow athletes taking these medicines for therapeutic use, and with an approved Therapeutic Use Exemption, to import personal supplies for the treatment of their medical condition while they are in Japan," it said.

In 2016, leaked confidential medical athlete data related to the Rio Games, including Biles' personal information, disclosed she had been granted an exemption to take medicine to treat ADHD. She then confirmed in tweets that she had ADHD and took medication for it.

But while 24-year-old Biles pulled out of some events during the Tokyo Olympics, she did not mention problems with access to medication when discussing why she chose not to compete. She has also said that she had not taken ADHD medication since 2017.