Coffin resembling phallus was used to bury Ghanaian man who performed circumcisions, not a sex worker

Facebook posts claiming that a family buried their “prostitute daughter” in a coffin shaped like a man’s genitals has been shared thousands of times in Africa. But the claim is misleading; the picture of the coffin published on Facebook comes from Ghana and shows the funeral of a man who conducted traditional male circumcisions in his community, locally known as a wanzam. A journalist who covered the story told AFP Fact Check that the man, whose funeral took place in 2020, had conducted circumcisions for several decades.

A post published by a Kenyan Facebook page on July 23, 2020 shared two images of a coffin shaped like a circumcised penis surrounded by a crowd. One year later, the post is recirculating online attracting new comments.

“A family buried their daughter (prostitute) in a casket resembling what she liked most,” reads the Facebook post, which has been shared more than 2,300 times. 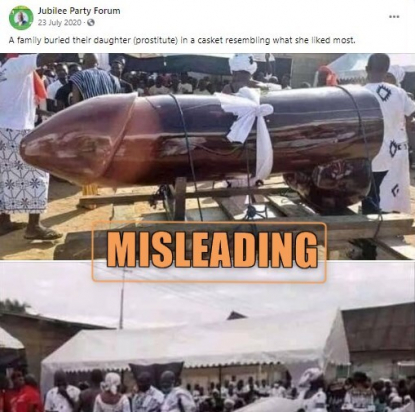 The same claim was shared in Nigeria, South Africa, Uganda and Cameroon.

This tweet from an account that describes itself as a Zimbabwean online news feed shared a similar claim but purported that the deceased was a woman who had died during intercourse.

Additionally, a search on social media monitoring tool CrowdTangle revealed that the claim has been shared by various humour pages and groups. From some of the comments, people appeared to believe the claim about the coffin belonging to a sex worker who died.

A screenshot showing search results of the misleading post on CrowdTangle, taken on August 6, 2021

However, while the image is genuine and the coffin was real, the claim is misleading.

A reverse image search showed media reports (here and here) indicating that the casket was the final resting place of a man from  Ghana who practised traditional male circumcisions.

An online search revealed that when images of the casket began spreading on the internet in July 2020, it led to the publication of articles here and here claiming the person buried in the coffin was a woman sex worker.

However, this Ghanian television station interviewed William Kpalpo Allotey, the brother of the deceased, John Nii Addo Allotey, and he confirmed that the family’s choice of coffin was intended to honour the decades-long work of his brother.

“In our community, the profession you are involved in, the type of work you do, is what we use to design the casket used for your burial. For a fisherman, we design a fish for you and since this man was a wanzam, we designed a human sexual organ for the burial,” Allotey said during the interview with Television CK.

“The man was a wanzam ... He was the main one in charge of the circumcision of boys in that community for about five decades. He circumcised over 2,000 penises,” Kwabena said.

Coffin designs in Ghana can be personalised based on a client’s life, dreams, passions, profession and status (see reports here, here and here).

“Designing fancy coffins started with my grandfather in 1951,” Isaac Tettehfio, who works in the coffin business in Teshie-Nungua, Ghana, told AFP Fact Check. “Now, it’s my father controlling the business. We do a lot of designs; animals, cars, airplanes. It cost about 2,000 to 3,000 Ghana cedis (about $300 to $500); an airplane in particular costs 3,500 cedis; a microphone 2,500 cedis. We have made a canoe that was exported.”

Tettehfio, who runs an Instagram page showcasing the business' fancy coffins, said that while he has designed penis-shaped coffins before, he does not recall making one for a sex worker.