As deadly wildfires spread across Turkey's south coast, social media posts shared six photos of fires, suggesting the pictures were taken during the disaster. The posts are misleading; most of the photos do not show wildfires in Turkey in 2021.

"TURKEY IS BEING BURNT DOWN," reads a tweet posted on July 30. "If you're not aware of what's going on, there are 47 fires going on in 7 different cities right now in Turkey. This has been going on for 2 days. People are dying, losing homes. They are trying to evacuate all the people but its too much. #PrayForTurkey". 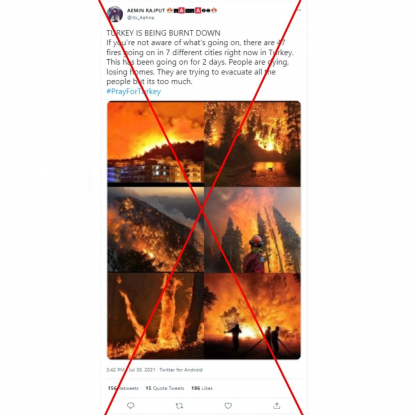 Similar posts were shared here, here and here on Twitter.

Tourists have been forced to escape on boats for safety and dozens of villages have been evacuated as wildfires that have killed eight people raged in southern Turkey, while blazes also hit Greece, Italy and Spain.

Reverse image searches found that four out of the six photos in the collage are from different fires over the past two decades.

The first image was taken in the Turkish province of Izmir in September 2020.

The picture, published by CNN Turk, shows a fire in the west side of the Botanical Garden in the coastal town of Dikili. 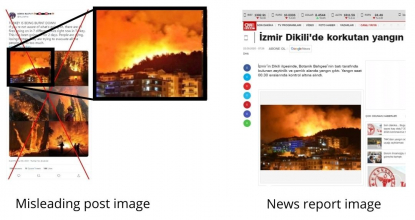 The second image -- which shows two deer watching a hill on fire near a lake -- was taken in the United States. John McColgan, a firefighters at the Bureau of Land Management Alaska Fire Service, took the photo in Montana’s Bitterroot Valley on August 6, 2000.

A more detailed version of the image can be seen here on the Earth Science Picture of the Day website, a photograph and image aggregator. 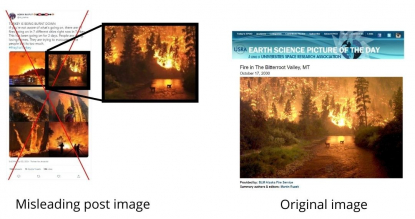 The third photo shows a person in protective gear facing a flaming forest. It was taken in British Colombia, Canada, in August 2019 by Michael Moen for this CBC radio article on the North Peace smokejumpers -- firefighters that parachute down to the site of a forest fire to help put it out. 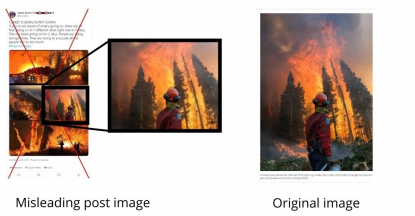 The fourth misleading pictures of two tree trunks on fire has been published before 2021 on Turkish websites, the earliest version of which can be found here from Aug 14, 2019. 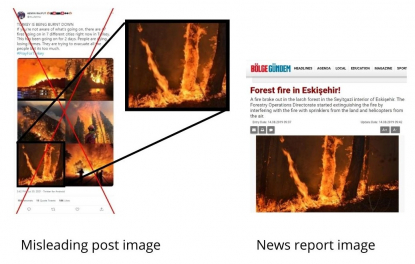 The fifth misleading photo was taken in Turkey in 2020 by Mahmut Serdar Alakuş for UNDP Turkey. It was included in this UNDP Eurasia article published on March 20, 2020. 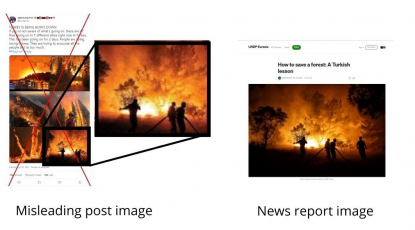 AFP was unable to identify the remaining image which appears to show a hillside on fire.